This is not pretty…..even FAUX News thinks Ralph Nader is over-the-top with his dreadful comment.  Ralph Nader, shall I point out, has proved his colors.  This is just not called for.

When John Kennedy had his aides go to the rooms that Lyndon Johnson was using during the Democratic Convention in 1960, does anyone think LBJ would open the door wearing only a towel….and then tell the aides to talk with Lady Bird as he finished dressing?  That is the question that I asked James today after reading this nugget in Newsweek.

At the GOP convention in St. Paul, Palin was completely unfazed by the boys’ club fraternity she had just joined. One night, Steve Schmidt and Mark Salter went to her hotel room to brief her. After a minute, Palin sailed into the room wearing nothing but a towel, with another on her wet hair. She told them to chat with her laconic husband, Todd. “I’ll be just a minute,” she said.

Please Tina Fey….just one more Saturday Night Live Skit with this as the set-up….pppplllleeaasseee!

Have we ever had a losing V.P. nominee address the nation with the defeated presidential candidate?  My memory says no.  (Correct me if I am wrong, as I love political trivia)  But ever the ‘maverick’, with her own set of brass balls, Sarah Palin thought she should share the speaking stage with John McCain.  I heard a rumor of that last night, but discounted it as well, a rumor.

Today Newsweek confirms the zeal of Sarah Palin to continue her role as the most bizarre female Republican in the nation.  I bet there are soooo many GOP’ers that are happy to see the jet trails of the vapors as Palin leaves the lower 48 for the Alaskan outpost.  Bye…bye.

McCain himself rarely spoke to Palin during the campaign, and aides kept him in the dark about the details of her spending on clothes because they were sure he would be offended. Palin asked to speak along with McCain at his Arizona concession speech Tuesday night, but campaign strategist Steve Schmidt vetoed the request.

The news accounts about the past months that led to the national election, are just starting to report on the inside stories that either define a wining race, or illiminate the causes for a losing campaign.  Today the latest, and I think a must read, comes from Newsweek.  A portion is below.

NEWSWEEK has also learned that Palin’s shopping spree at high-end department stores was more extensive than previously reported. While publicly supporting Palin, McCain’s top advisers privately fumed at what they regarded as her outrageous profligacy. One senior aide said that Nicolle Wallace had told Palin to buy three suits for the convention and hire a stylist. But instead, the vice presidential nominee began buying for herself and her family—clothes and accessories from top stores such as Saks Fifth Avenue and Neiman Marcus. According to two knowledgeable sources, a vast majority of the clothes were bought by a wealthy donor, who was shocked when he got the bill. Palin also used low-level staffers to buy some of the clothes on their credit cards. The McCain campaign found out last week when the aides sought reimbursement. One aide estimated that she spent “tens of thousands” more than the reported $150,000, and that $20,000 to $40,000 went to buy clothes for her husband. Some articles of clothing have apparently been lost. An angry aide characterized the shopping spree as “Wasilla hillbillies looting Neiman Marcus from coast to coast,” and said the truth will eventually come out when the Republican Party audits its books.

When I was a boy the music at Democratic conventions, and around Election Day, would always include the spirited song “Happy Days Are Here Again”, which was either to help get out the vote, or celebrate the victory at the polls.  Granted, the song started making an impact in 1932, and I was a boy a few decades ago…..but I know after last night the song is still relevant.

During the 1932 Democratic Convention in Chicago the supporters of FDR did not have a theme song.  One of FDR’s staunch early backers thought that “Anchors Aweigh” might be fitting, given the past service Roosevelt had with the Navy.  But at the last moment that song was jettisoned as it was being used in a national radio advertising campaign for a cigarette company.

It was a secretary in the FDR campaign that thought perhaps the song from an MGM film “Chasing Rainbows”, might somehow work.  The campaign managers thought the song had zip, and conveyed an uplifting message a nation in the depression, and worrying about the future, needed to hear.

The skies above are clear again!

Let’s all sing a song of cheer again-

I played this song often in my radio days, and this was the one I found myself singing again in the shower this morning.  It fits the mood we all feel from sea to shining sea! 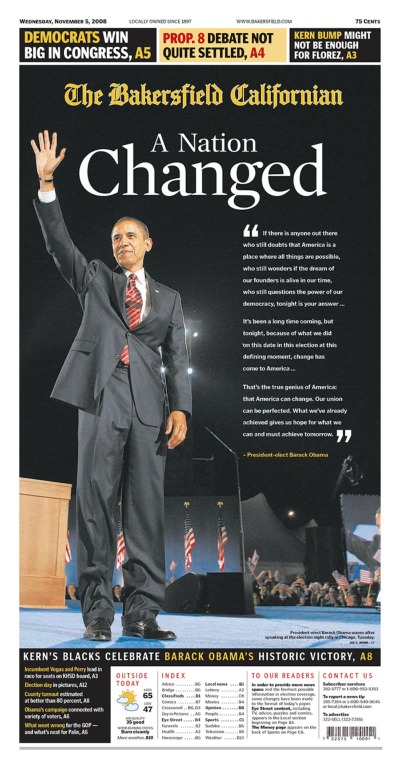 The world reacted with pleasure over the election of Barack Obama as President.  There is also world-wide recognition that much change is needed in policy for better international relations.

The BBC’s Justin Webb in Washington says Americans have made two fundamental statements about themselves – that they are profoundly unhappy with the status quo, and that they are slamming the door on the country’s racial past.

They may be a long way from the celebrations and razzmatazz in Washington, but Korean farmers will be cheering America’s choice for its new president just as loudly.

Last year the US and South Korea signed a free trade deal, the second biggest in US history.

If it is ratified by both parliaments, farmers here believe their livelihoods will be swamped by cheaper food from across the Pacific.

Barack Obama turns out to be an unlikely ally.

He’s of the opinion that the agreement is bad news for American car workers, and he wants it renegotiated.

Speak to Palestinians and read their newspaper editorials, and you will find relief at the imminent end of the current US administration.

They never saw George W Bush as an honest peace broker, but have higher hopes for Barack Obama.

It is true that many Palestinians were upset, earlier this year, when Mr Obama said Jerusalem should be the “undivided” capital of Israel, even though he did backtrack on that comment somewhat.

But others were heartened by the fact that, unlike John McCain, he did at least visit the occupied Palestinian territories, albeit for little more than an hour.

Palestinians were encouraged when Mr Obama made a commitment to work for a breakthrough in the conflict “from the minute I’m sworn into office.”

No country in the world watched the outcome of the US election more closely than Iran.

Despite the “Death to America” slogans at government endorsed rallies, most ordinary Iranians long for an end to their international isolation.

They believe they have a better chance of dialogue with a president whose names means “he with us” in Farsi – Uw, ba, Ma – Barack Obama, than with his defeated rival who once jokingly sang “bomb, bomb, bomb Iran”.

As for those in power here, the equation is a bit more complicated.

The supreme leader, Ayatollah Ali Khamenei, sounds as if he believes his rhetoric about America being the Great Satan. For this world view, it would have been much simpler to have a US president you can paint as a new version of George W Bush.

By contrast, despite his uncompromising language, President Ahmadinejad wants and needs a reconciliation with the US as he faces re-election next summer at a time of growing economic crisis in Iran.

And almost all Iranians hold a firm belief that their country is of global importance, at the centre of the world stage, demanding urgent attention from the new US president. But they could be disappointed.