I still know in my heart that Howard Dean would have made an excellent President of the United States.  When he ran in 2004 I was a strong and vocal supporter.  His stands on foreign policy, and his progressive ideas on social issues made him a no-brainer for voters who wanted grit and intelligence wrapped up in one candidate. 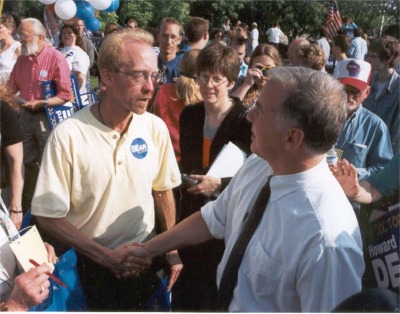 I admit that I had some issues with him during his time as head of the Democratic National Committee.  But the larger goals that he pursued were the same that I strongly supported.  The means that he sometimes took to get to the finish line was where he and I at times parted.   But this post is not about the past.   After all, Democrats took back the White House and made 2008 into what I suspect will be seen as a transformational election. I think it will not be seen as a blip, but a national correction.

And lets be honest, Howard Dean played a huge role in that outcome.  Not perfect, but pivotal. And he should not be forgotten now in the naming of important people to government jobs.  Howard Dean deserves a job within the Barack Obama administration.

Former Vermont governor Howard Dean, the man regarded by many sharp political operatives as the progenitor of President-elect Barack Obama‘s successful 2008 campaign, finds himself without an obvious next job as his tenure as head of the Democratic National Committee comes to an end.

Those closest to Dean insist that he has any number of job offers and spots on corporate boards at his fingertips, is traveling to Europe three times in early 2009 to advise progressive parties about the lessons learned from the 2008 campaign, and is speaking out on his pet issue — health care.

And yet, it’s hard not to see Dean as a lesson in how political hardball is played in Washington. Never liked by establishment party figures — Dean publicly feuded with incoming White House chief of staff  Rahm Emanuel (Ill.) when the latter headed the Democratic Congressional Campaign Committee during the 2006 election cycle — Dean finds himself on the outside looking in as a new Democratic administration comes to town.

3 thoughts on “Howard Dean Looking For A Job”