Yes, we watch Iron Chef America.  As such we were looking forward to the episode that aired tonight with First Lady Michelle Obama providing ‘the secret ingredient.’    The First Lady let the chefs use anything they wanted from the vegetable garden that made for much news in 2009.  While the White House garden looked interesting, it did not prompt as much comment here as did Mario Batali.  More specifically, whatever he had on as shoes, or slippers, or  God-only knows.   It looked strange, and more important inappropriate for a visit to the White House!  Even for an outdoor camera shoot, Mario Batali looked just plain goofy.  If he was trying to compete with the First Lady for style and splash he lost by a mile. 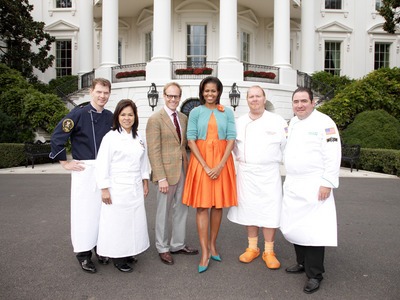 And then there are his socks……..

How does Badger Guns stay in business?

How does that happen you ask?  Good question.

Watch the history of those violations here.

This story is simply unbelievable.   Last year I posted on the crimes and problems that resulted from Badger Guns in West Milwaukee.  There was one simple remedy for the problem.  Shut the business down that had caused the wounding of police officers, and numerous other killings and crimes.  Instead of closing Badger Guns for all the rational reasons that most of my readers can understand given the history involved, there was a series of  smooth moves by the owners that allows gun crimes and deaths to continue.  After reading this news story I know you will agree that there are some loop-holes in the laws and regulations that need tightening.  How many more wounded police officers will be needed before society says to Badger Guns ‘enough is enough’?

Federal investigators recommended revoking the license of Badger Outdoors gun shop after a 2006 inspection – a rare move that could have closed the West Milwaukee business, a Milwaukee Journal Sentinel investigation has found.

But there was no revocation and the store remains open, operating as Badger Guns. Federal records show the license recommended for revocation was voluntarily relinquished, the players inside the operation took on new roles and a new license was issued, creating what one federal official called a “clean slate” for the store.

Badger Outdoors and later Badger Guns have sold the bulk of crime guns recovered by police in Milwaukee for at least the past decade, according to records obtained by the Journal Sentinel.

And federal court records since 2004 for eastern Wisconsin show three-quarters of straw buyer criminal cases – where someone with a clean record buys a gun for a felon – involved purchases from Badger Guns or Badger Outdoors.

Following the 2006 inspection, after which revocation was recommended, several changes were made, according to federal documents and officials.

• Milton “Mick” Beatovic, 63, vice president and co-owner of Badger Outdoors, told officials during the November 2006 inspection that he was retiring. He gave up the license the following year. A corporation controlled by Beatovic still owns the building and is the landlord, receiving rent payments from the business.

• Walter Allan, 56, the president and other owner of Badger Outdoors, became an employee at Badger Guns.

• Adam Allan, a longtime Badger Outdoors employee and son of Walter Allan, took out a new license. Federal documents show the 28-year-old had little knowledge of the store’s management prior to the changeover. The store name became Badger Guns, but little else changed at the operation on S. 43rd St. Badger Guns pays rent to Beatovic’s corporation.

The moves not only halted the revocation process but also erased violations found by federal regulators over 17 years at Badger Outdoors – which had been the top seller of crime guns not just in Milwaukee but the nation in 2005 with 537 such guns, according to records from the U.S. Bureau of Alcohol, Tobacco, Firearms and Explosives obtained by the newspaper through the Freedom of Information Act.

The rankings revealed that a tiny percentage of gun dealers sell a majority of crime guns. Congress then sharply restricted release of the information behind the rankings. Congress also forbade ATF from revealing what violations it finds at gun stores. (See related story, 1A.)

In the case of Badger Outdoors, all the violations found by ATF over the years were blacked out in 400 pages of documents released to the newspaper.

But in an interview, a top ATF official said inspectors found “inventory discrepancies” during the November 2006 inspection and added that his agency doesn’t recommend revocation for minor violations.

ATF inspectors treat problems in a gun store’s inventory records seriously because those records are their tool for tracking guns, according to experts and a federal judge, who recently upheld the revocation of a Washington state gun dealer.

“This is a serious problem because those weapons are not accounted for,” wrote U.S. District Judge Ricardo Martinez of that gun store’s inventory record problems.

In the instance of Badger Outdoors, Beatovic said his decision to give up the license, sell the business and retire to Arizona had nothing to do with the problems found in the November 2006 inspection, which he called “paperwork stuff.” He said he knew nothing about the recommended revocation.

As I read the story about  Hillary Clinton I could not help but think about the latest book I am loving.   This weekend I am in the middle of a truly amazing book  by Erik Larson.  “The Devil In The White City”  deals with the twin stories of the construction project for the 1893 World’s Fair in Chicago, and the truly bizarre serial killer that is out of control at the same time.  The killer is committing his crimes very close to the location for the fair at Jackson Park, and as such Larson combines his love of history with the fine talent of a mystery writer.  It makes for a grand combination!  I read lots of history and biography, and  never have I read a text where the author had such power and skill to create a narrative that reads like this one.

With that as a side-note and a hope you pick the book up to enjoy, comes the newspaper story about Secretary of State Hillary Clinton, (who I think has done a most admirable job this past year and in large measure has restored my faith in her following the political campaign of 2008 that made me question her style and motives) and her role in the Shanghai Fair.  She has star power, and I like it when she uses it for national good.  I admit, I like to feel good about Hillary.   And I like it when she makes it so easy to feel this way.

“The idea, for many people, of raising more than $50 million would seem really daunting,” Mrs. Clinton said in an interview. “Maybe because I had participated in raising so much money in the past, I wasn’t daunted by it. I knew it was going to be hard under the circumstances.”

By all accounts, the effort to build a national pavilion was near death at the end of the Bush administration. The near-collapse of the global economy, the proximity of the expo to the Beijing Olympics in 2008 and the general ambivalence of the State Department had left U.S.A. Pavilion, the nonprofit group in charge of the project, with little support or money.

“There is a sense in the U.S. that Americans got disenchanted” with world’s fairs, said Nick Winslow, a former Warner Brothers executive who is the president of U.S.A. Pavilion.

With deadlines passing, the Chinese advanced the Americans money to conduct technical work for the pavilion. They raised the issue with former President Jimmy Carter when he visited China last January.

Enter Mrs. Clinton, who made her first trip as secretary of state to Beijing in February and was eager to talk about trade, climate change and the North Korean nuclear threat. Instead, she got an earful about how bad it would be if the United States did not have a presence at the Shanghai Expo.

For the Chinese, the expo is a bookend to the Olympics. Shanghai is spending $45 billion to transform the city, even more than Beijing spent preparing for the Games. Nearly 200 countries have signed on to take part, leaving only the United States and minuscule Andorra as potential no-shows.

“I was dumbfounded that so little attention had been paid to it,” Mrs. Clinton said. “Everyone knows China is going to be an enormously powerful player in the 21st century. They have an expo, which is a kind of rite of passage that countries like to do to show they have arrived. We’re not there? What does that say?”

In a front page newspaper article on the rise of those who need food stamps in the nation was a line that made me glad I had swallowed the coffee in my mouth before I read it.  Before the humor was printed there were these sad national facts of the story.

1) About six million Americans receiving food stamps report they have no other income, according to an analysis of state data collected by The New York Times.

2)About one in 50 Americans now lives in a household with a reported income that consists of nothing but a food-stamp card.

3)One in eight Americans now receives food stamps, including one in four children.

A grandmother whose voice mail message urges callers to “have a blessed good day,” Wanda Debnam, 53, once drove 18-wheelers and dreamed of selling real estate. But she lost her job at Starbucks this year and moved in with her son in nearby Lehigh Acres. Now she sleeps with her 8-year-old granddaughter under a poster of the Jonas Brothers and uses her food stamps to avoid her daughter-in-law’s cooking.

Hope the daughter-in-law does not read the Sunday NYT’s!

Remember when the special effects in this film were among the ultimate in cinematic experiences?   If for no other reason Shelly Winters still makes this film worthy of watching.