This is utterly confounding.  I grew up at a time when Anita Bryant bashed gays, thinking that she was on the cutting edge of a trend that would allow for all sorts of strict laws and moral codes to be enacted that would slam the door on social justice once and for all.  In high school many of my peers were able to see the folly of her thinking, and laughed at her.  In time Anita Bryant found she was on the other side of history, and was shunned by many.  But now she has somehow found an audience, and will stride onto the stage…with teabaggers in attendance…. to once again recreate her haranguing against homosexuals.  Some have no shame.

The controversial Queen of Gay Hate, Anita Bryant, will be returning to the stage on July 9, 2010 for a patriotic performance in Yukon, OK before an Oklahoma-based group that has become nationally known for its malevolent attacks on gays and whose members include the husband of leading homophobe State Rep. Sally Kern.

Bryant’s appearance is part of a two-day conference spanning July 9th and 10th calling for a return to America’s Christian heritage, a crusade against Muslims and gays, and will coincide with the first ever Patriot Pastors Tea Party. The headliner for the event is the widely discredited David Barton, who, to push his Christian heritage agenda, has been caught numerous times fudging history and fabricating quotes that he would then claim were made by the Founding Fathers. Barton has gained criticism for speaking at Christian Identity gatherings that called for the execution of homosexuals.

Everything I have ever thought or written about the teabaggers has proved to be correct.  Over and over again they prove to be the most base of any political grouping in the nation today.  What they lack for in intelligence, they make up for in racism and rancid acts.  The latest example of teabaggers extreme right-wing hate is horrible.  This billboard was placed in Mason City, Iowa. 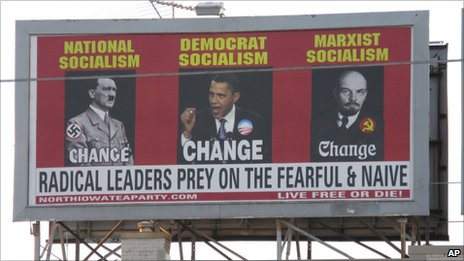 Please note that when other teabaggers wanted the sign removed they did not speak to why it was offensive to the President, only how it would injure their own cause.

A billboard advert in the US state of Iowa that linked President Obama to Adolf Hitler and Vladimir Lenin was removed on Wednesday morning.

The sign, which was funded by a group of local Tea Party activists, has been replaced with a community service announcement.

Text on the sign had read: “Radical leaders prey on the fearful & naive.”

The billboard had angered many in the local community, including other Tea Party activists.

A representative of the Iowa group called the billboard’s owner and requested the sign be removed on Tuesday evening.

A national Tea Party representative had called the controversial poster a waste of money, time and resources.

“It’s not going to help our cause. It’s going to make people think that the Tea Party is full of a bunch of right-wing fringe people, and that’s not true,” Shelby Blakely, of the national Tea Party Patriots group, told the Associated Press agency.

“When you compare Obama to Hitler, that to me does a disservice to the Jews who both survived and died in the Holocaust and to the Germans who lived under Nazi regime rule,” Mr Blakely said.

And they all lived happily ever-after!  I mean, what possibly could go wrong with Sarah Palin in the mix?  There is just no commentary that is needed for this crazy bunch from Wasilla, Alaska.    To put a large group of dysfunctional trailer-park types in one family and let them struggle for the top is just too hilarious.  I think someone, somewhere must be thinking….this would be a great reality TV show.   Anyone care to make a bet?  There is always money and opportunity when any of these Alaska hillbillies hatch ideas.

The most amazing real-life soap opera of our times has taken a new twist: Bristol Palin and Levi Johnston are engaged.

Make that two twists: They apparently shared the news with US Weekly before her mom.

There they are on the magazine’s cover, holding their 18-month-old son Tripp and explaining how they got back together after the most famous teenage breakup ever. Engaged during her mother’s vice-presidential campaign, they parted shortly after their son’s birth, and the split quickly turned tabloid-ugly. But they said they bonded again while trying to work out a custody plan three months ago.

“I really thought we were over,” he told the magazine, but feelings changed when they went for a walk with their son. Nothing really happened then, she said, but he later texted her saying that he misses her and wanted her back. “I was in shock,” she told US.

This begins to explain Levi’s recent public apology to the Palin family. Bristol acknowledged that her mother didn’t know they were back together yet: “It is intimidating and scary just to think about what her reaction is going to be.”

The other night I was reading and came across this most wonderful story from July 14, 1765.  As is my custom when something strikes me as funny or just plain interesting I read it to James.  As a result he is now filled with all sorts of useless information.

From  “Abigail And John: A Portrait Of A Marriage”  by Edith Gelles comes my quick version of events.

John Adams was downstairs in the parlor of his Braintree, Massachusetts home while his wife was upstairs being tended to by a midwife.  There was no way for John, age 30, not to hear the distress of his wife, or feel her discomfort as labor pains consumed her.  His  diary states that he had an “uneasy state of the human mind” which made him turn his thoughts to writing as the birth process continued.  After all, at this time in history childbirth was hazardous, and he needed to focus on something else.  He wrote the following words after the birth of their first child, Abigail.

“Without any particular subject to write on, my mind turned I know not how into a speculation or rather a rhapsody which I (later) sent to the Boston Gazette, and was there published without a title or signature.”

The thing that was so amazing is that this was his first great essay he would pen, doing so at the same time his first child, Abigail, was being born.  The essay was about the founding of America, and its unique historic mission.  In time it would be published serially under the title, “A Dissertation On The Canon And Feudal Law”.

Working under stress would be something John Adams would do over and over again throughout his life.