If there was any one moment Thursday that made everyone stop and turn, salute and cheer, it was when the firefighters came to stand alongside their fellow union members.  It was a powerful, emotional, and truly American moment.  Pictures here.

Union members and concerned citizens of Wisconsin  need to hold accountable those who contributed heavily to Scott Walker’s campaign.  We should not give them our business if they can not now stand up and publicly denounce Walkers’ union busting bill.

If these companies can not stand with state and public workers of this state, why should we buy their products?

Therefore here is a sample letter for one of Walker’s large contributors.  Feel free to use it and modify it for your use.

I am writing to express my dismay at how your company has not come out four-square against the proposal of the Gov. Walker to strip WI workers of their right to collectively bargain for their wages and treatment in the workplace.  Knowing that you were a major contributor to his election campaign, I would rather expect that your opinions would count more than mine in his decision-making process.  We know how money is what gets you to the dance, shall we say.  Now that you are there, you really should be saying that for your money, we should be able to get basic fairness.

I grew up in a state where there were no brats.  When I moved here and saw the first sign for a sale on Johnsonville brats, which are delicious, I thought to myself, “What a great way to get rid of troublesome children!”  This note is rather to inform you that I will no longer be purchasing brats made by your company, that is until I see that you have decided to come out against the politics of this governor, who you sponsored so heavily.

It is time that we make contact with the campaign donors of Governor Scott Walker and let them know what we think of their support of a man without a college degree, who is now stripping state and public workers of their collective bargaining rights.

To get this started I have several businesses to contact to ger the effort underway.   With your help this list will grow.

Perhaps we can gather more 800 numbers, weblinks, and emails and start contacting these businesses and let them know why we will boycott them unless they take a stand against Walker.

Here is a start:

Car dealers in Wisconsin..names and  contacts.

Lets cut to the core.  I am making this easy for my fellow citizens tonight….see specialized areas below for researching.  Let us see who spent money on Scott Walker to get him elected.  This is all thanks to Wisconsin Democracy!

All this for Walker, a man I need to state again who never finished college.  A governor who is now wanting to end collective bargaining for all state and public employess….except for the ones that endorsed him in his election.

Lets look at the names and businesses….and start to use our money accordingly.

How much did those in the medical services ante up in money for Walker?

How about real estate?

How about the tourism industry in Wisconsin?

How about businesses across the state?…This is a good one!

I hear someone ask about banking….here it is.

Lawyers who thought Scott Walker should be governor.

There is no reason that we should buy gas from large chains that helped Walker be elected.  There  is no reason to buy a car from a large company that thought it more important to elect a Republican than an educated candidate.

Keep them open and read this…….it is startling.

Question is what will you now do with the information.

If there was any one moment Thursday that made everyone stop and turn, salute and cheer, it was when the firefighters came to stand alongside their fellow union members.  It was a powerful, emotional, and truly American moment.  I can only hope the pictures here convey the impact the firefighters made as they walked to the Wisconsin State Capitol on Thursday. 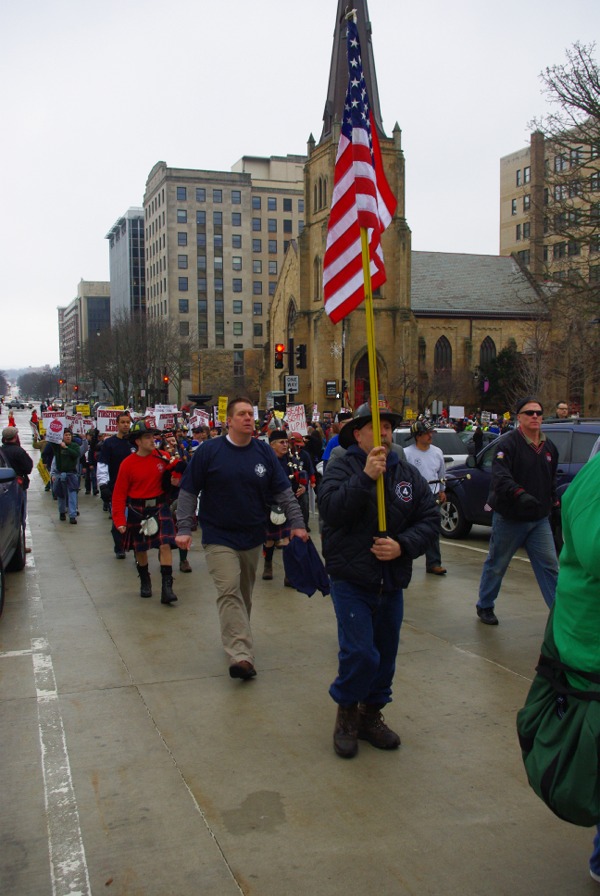 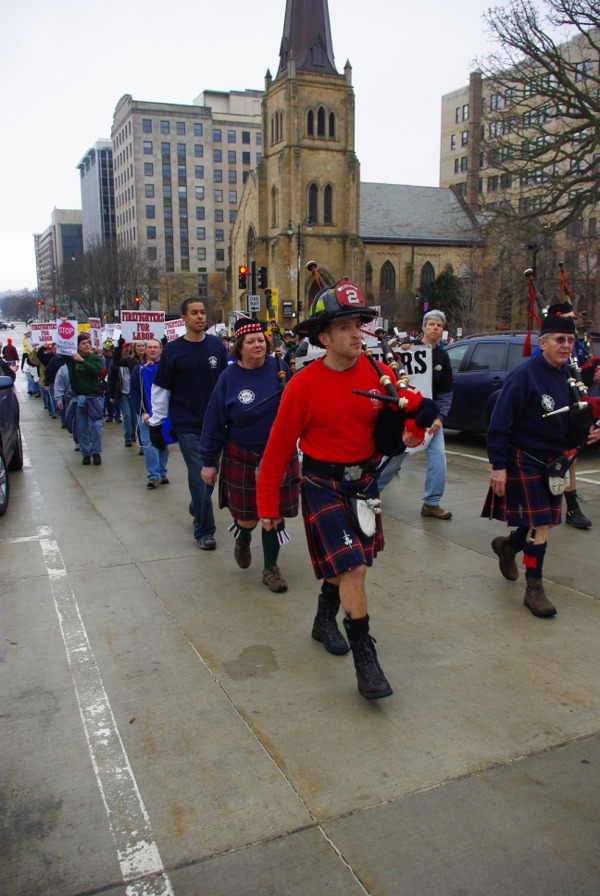 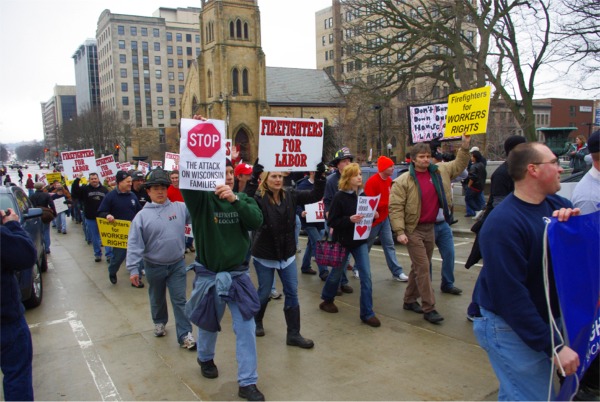 I snapped this picture as I spent time with others from around Wisconsin as we protested Governor Walker’s attack on public employees in the state.  It sums up what we all know to be true.

There were plenty of reasons to shout and hold a sign at the Wisconsin State Capitol today as workers made every attempt to stop Governor Walker’s bill that would end collective bargaining in the state for public employees.

But there were some in the Capitol that found other ways to spend their time…and in some cases still make a difference.

The young person below came prepared for the stay with her Barbie collection. 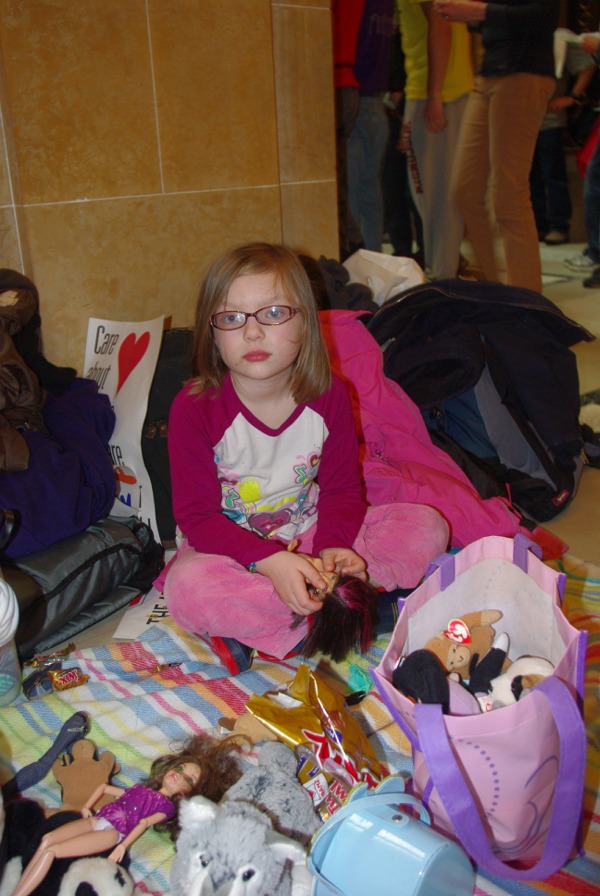 Among the shouts of “kill the bill” were 1960’s protest singing from what I am assuming  were ‘Peter, Paul, and Martin’.   And yeah, the harmonic playing was very nice to hear.

At the end of the day it was all about making a difference for our friends, neighbors, and communities in this state as we fight this destructive bill.    As such even kids carried signs.  One of the cute ones I saw today was this lad below who was cold…there he was with his hands inside his coat…trying to make a difference for us all.

I spent several hours at the Wisconsin State Capitol today in solidarity with my fellow citizens who are exercising their constitutional rights.  It was again an emotional and uplifting experience.  Later on my blog I will have some reflections about this week.  For now some pictures that moved me, others that made me laugh, and to he honest some that brought tears to my eyes.  When I stood in the rotunda and saw the faces from across the state who are determined to make a difference, and were lifting their voices so all in the building could hear….it touched me.  This is what America is all about.  I detest what Governor Walker is doing, but I admire and deeply respect those I saw at the statehouse today, and all this week. 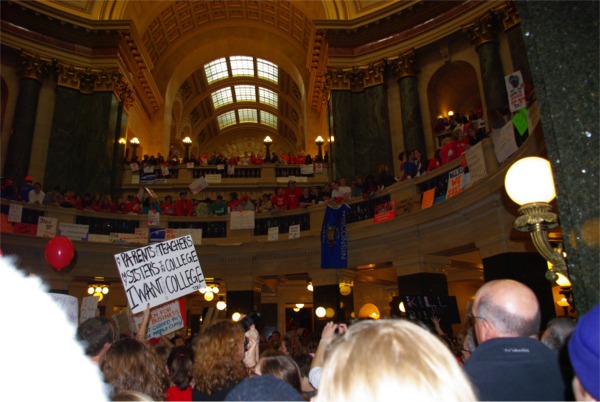 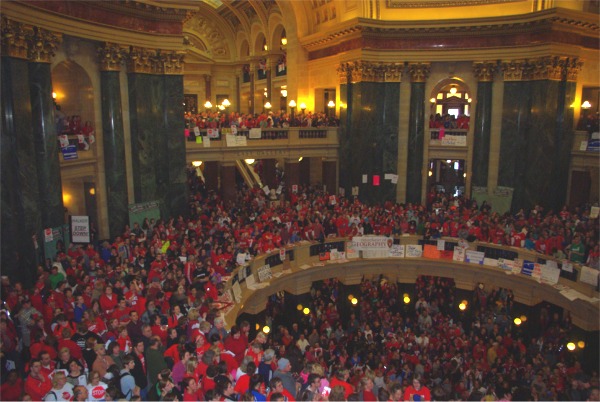 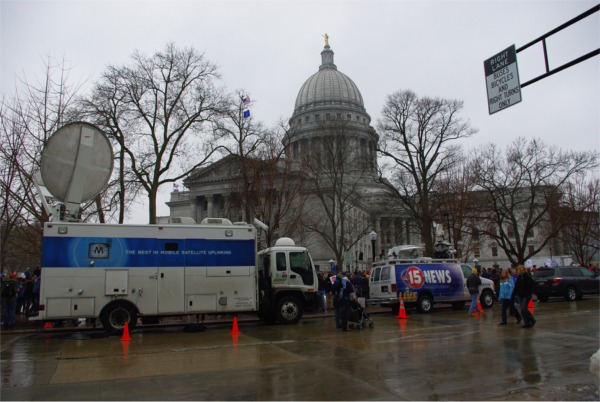 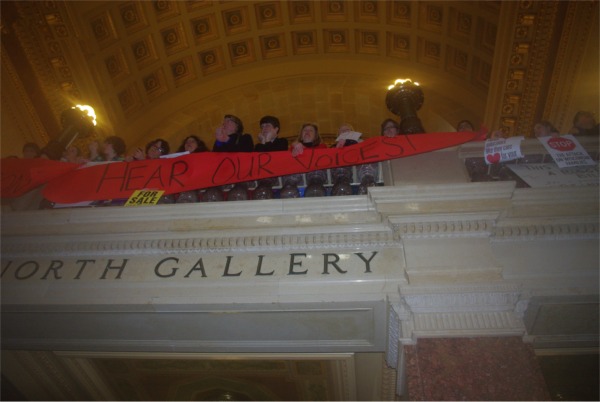 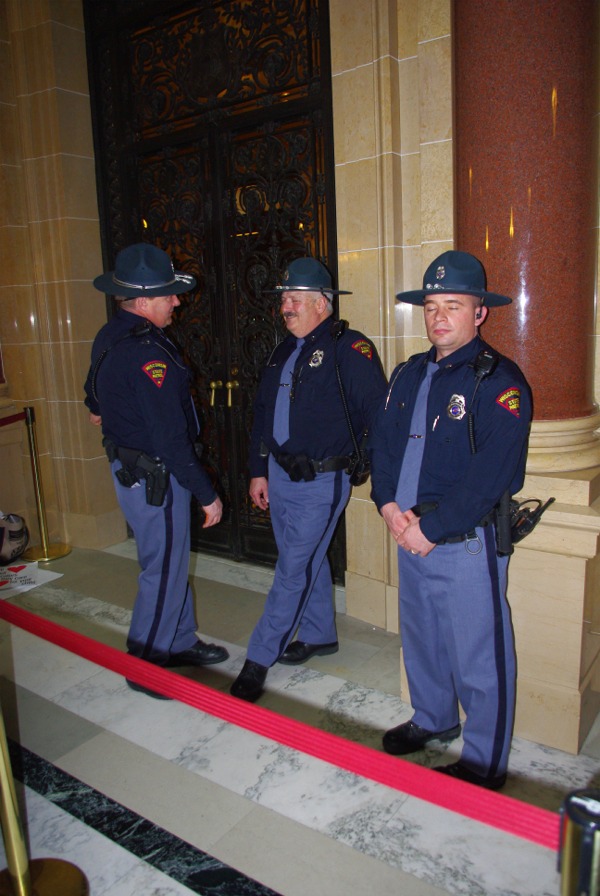