This is great news from the Eagle Cam.  The cam link is located on the right-hand side of this blog.  The story below deals with the first hatching.  The second one took place on Tuesday.

The first of three eggs hatched March 13, 2011 at about 11:15 to 11:25. WVEC web cam viewers got to see half of the egg shell picked up by the female at 11:25. The first proof that an egg was about to hatch was a NBG webcam photo at 8:21 of a pip in the first egg. From then until about 11:00 the female kept getting up and down every couple minutes, and adjusting her position and moving the three eggs. At 11:15 the male arrived at the nest and the female would not get up and let him take over incubating chores, so he left. At 11:25 the female picked up half the egg shell and placed it on the edge of the nest pocket. The first chick had obviously hatched. It would have been exhausted from all the effort to break out of the shell. It was not until 12:43 that we got the first view of the eaglet. The male came in at 1:51 to check things out, but did not enter the nest. Mom being very protective even of dad, but you can see the chicks head being held high. Mom gets a closer look at her first offspring of the 2011 season. About 37 days 20 hours and 25 minutes since egg laid in the nest. 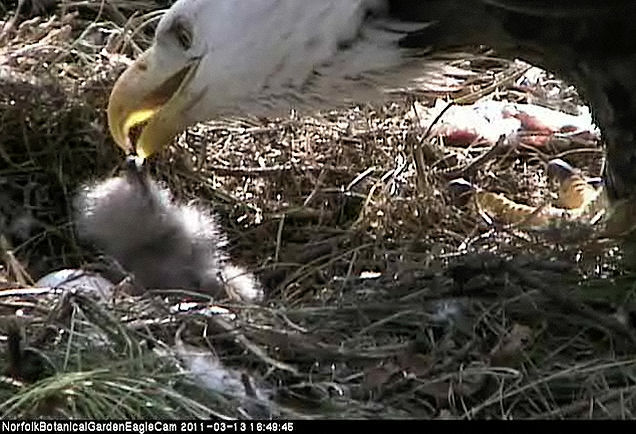