From being smart and outspoken on the issues of the day, to being fragile and real as a human being even though occupying a most visible place in the nation’s political drama, Betty Ford was a unique woman.

There was so much to admire about this woman.  I knew her growing up from the newspaper stories and television broadcasts that made her seem like any average person, as opposed to some far-off wife of a politician.  That was her charm.

Her candor and forthright discussion of her personal battles with breast cancer,  prescription drug addiction and alcoholism along with her progressive views about abortion, sex, gay rights, marijuana, the Equal Rights Amendment  made her someone we all could connect with.

Betty Ford also voiced her support for gay and lesbian rights in the workplace and later, with the former President, in favor of same-gender marriage. “God put us all here for His own purposes; it’s not my business to try and second-guess Him,” she wrote several years earlier. “I think Anita Bryant’s taking action against the gay population was ill-considered. I don’t believe people should lose their jobs because of their sexual preferences…”

President Gerald Ford could have picked no better soul mate and political partner.

Betty Ford died Friday at the age of 93.

Betty Ford could be late for meetings while in the White House, jealous at times of other women, opinionated about policy, and also vulnerable to the slings that get cast at those who reside at 1600 Pennsylvania Avenue.  But there was one thing the world always saw when they looked at Betty Ford.

They saw the smile.

There are easier ways to make one’s way through life than to be the wife of the President, or the spouse of a very important member of Congress.  With grace, poise, and a continuous attitude of finding a way to make it over the latest hill that confronted her, Betty Ford endeared herself to the public.

Not everyone who lives in the public arena is missed at the end.  Betty Ford is one that will be fondly recalled, and warmly thought of as years pass.

There are a series of photos of the former First Lady that I suspect many will enjoy. 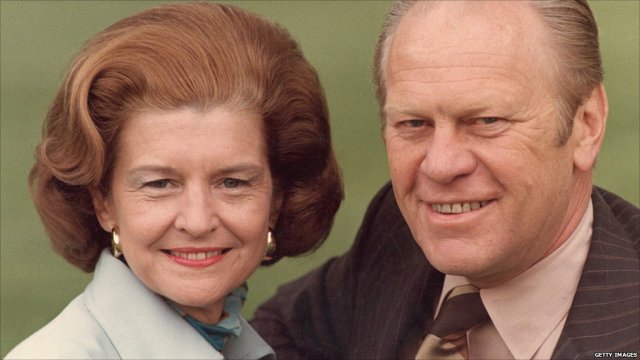 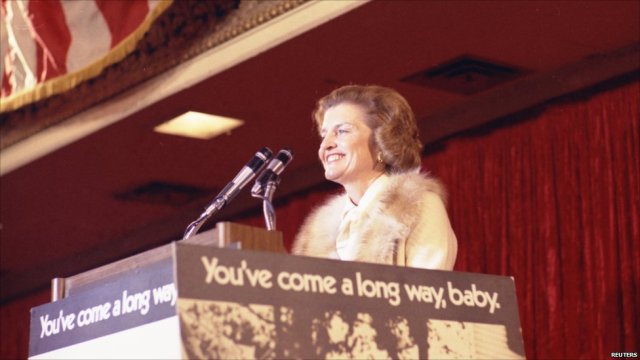 One thought on “First Lady Betty Ford’s Life In Pictures”