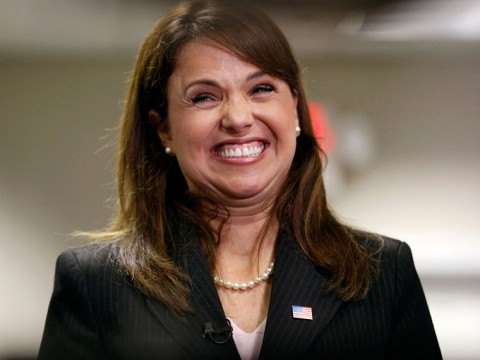 CP had far too much fun with one of 2010’s more outrageous candidates for the U.S. Senate, Christine O’Donnell, as she tried to convince voters she was not a witch.   Just when most people had forgotten about her tortured use of politics to extricate herself from her personal financial mess she pops up with a book to promote about the Tea Party.    As if that group does not have enough problems without O’Donnell trying to explain their reason for playing politics.

But as the nation witnessed last night Christine O’Donnell’s sense of how interviews proceed when promoting a book, are as shallow as her policy stands were as a candidate last year.

What mystifies me is how conservatives like Christine O’Donnell can stake out the most rigid and ludicrous positions on issues such as gay marriage or other topics that play to the cultural war they always seem to be stoking, and yet get all pissy about being held accountable for further explaining them.

Never in conversations around the kitchen table, or at meetings in the neighborhood where issues are being debated, have I been reticent about where I stand.  This blog is proof of that.  One either has a sense of their convictions and positions, or they should just stay quiet.  O’Donnell has not yet learned that lesson.

So why do airheads like Christine O’Donnell who feel some need to venture into the public arena get all offended over being held accountable for the views they want to promote?

I suggest that gay bigots such as Christine O’Donnell know damn well they are more and more marginalized, as  the polls suggest, and so wish to lob the grenade but never take responsibility for it.  The get frustrated at not having facts to support discrimination.  Just as there were no good reasons for separate drinking fountains decades ago, there is no logic to perpetuating gay bigotry today.

As such when Christine O’Donnell got flustered for being held accountable for her uneducated views she left a national CNN interview.

The least she could have done was fly off on her broom.

“I’m not talking about policies. I’m not running for office,” O’Donnell said. “Ask Michele Bachmann what she thinks.”

When Morgan asked her why she was being “weird” about answering questions on her own statements, as well as issues she addresses in her new book, “Troublemaker,” O’Donnell fired back, saying she only wanted to talk about tea party principles outlined in her book.

“That’s why I agreed to come on your show. That’s what I want to talk about,” O’Donnell said. “I’m not being weird. You’re being a little rude.”

7 thoughts on “Christine O’Donnell Falters On Sexual Abstinence And Gay Marriage, Proves She Is Not Mentally Prepared For Public Stage”