Tonight a gun-loving reader wrote a comment with this line, “Poor park ranger Margaret Anderson. I wonder what she did wrong to get shot? “

Needless to say the comment was not posted.   To say I am appalled does not begin to define my reaction.   The comment also included, “I like the guns. Guys in the know always load a tracer as the second round in. When you see the tracer leave the weapon then you know that you have only one more bullet left.”

There are some truly sick people in America.

By all accounts a very troubled person, Benjamin Colton Barnes, was involved in a custody dispute in Tacoma Washington. That happened in July 2011. At the time the toddler’s mother sought a temporary restraining order against him. She wrote that Barnes was suicidal and possibly suffered from PTSD after deploying to Iraq in 2007-2008. She said he was easily irritated, angry and depressed and kept an arsenal of weapons in his home.

With a totally unreasonable interpretation of the Second Amendment, along with the stranglehold that the NRA has on legislative bodies, there is no way to seemingly stop the madness that is contained in this photo of Barnes.

Is this really what you want to have happen in America?  Are you proud to see this photo?  This photo below is America’s t gun policy! 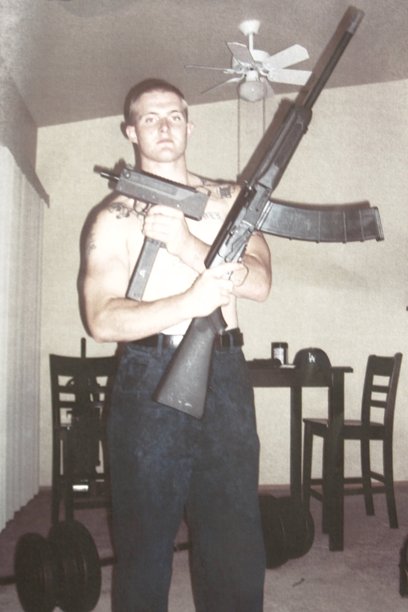 Barnes is considered the reason for the the fatal New Year’s Day shooting of park ranger Margaret Anderson at Washington’s Mount Rainier National Park, along with a shooting Sunday in the Seattle suburb of Skyway that left four people wounded.

Common sense tells us all what needs to be done in relation to guns and society.  In 2012 will we heed that inner voice and demand our elected representatives pay more attention to the people than the monied-interests of the NRA?

23 thoughts on “Does NRA Find Anything Wrong With This Picture Of Benjamin Colton Barnes?”