There was only one place to be–at least for me–on Tuesday night as the polls closed, and the counting started for the historic recall election in Wisconsin.  After 17 months of drama there was no other place for me to have been than at the State Capitol.

Living only a few blocks way has meant that much of the energy and headlines that played out during the collective bargaining fight was something that James and I were able to witness first-hand.  As the last act of this story was played out with the recall election we made our way once again to the lawn of the statehouse.

A lively and energized band took to the Capitol steps making for the last hour of voting to be filled with hand-clapping and dancing. 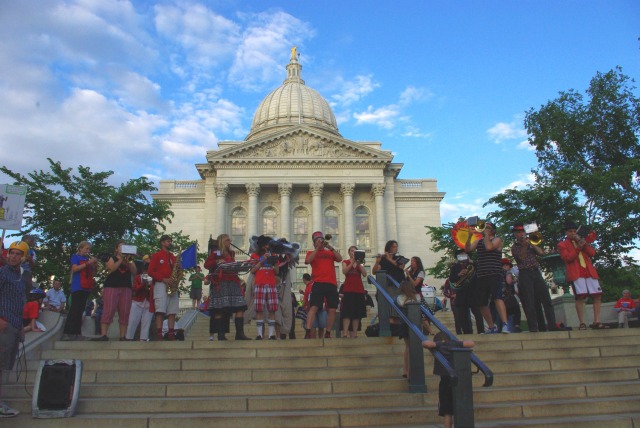 I am always thrilled to see young faces, and know that there is indeed others who will follow in our steps and work to make Wisconsin a better place to live. 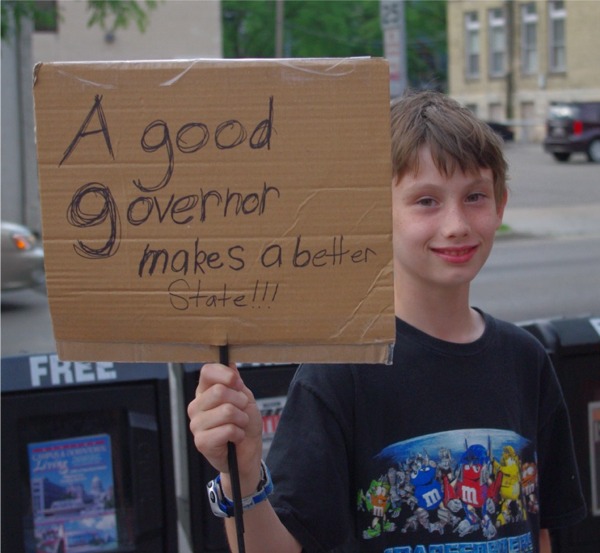 There are always a few moments when smiles are made, as political points are being presented.

The Don Johnson look was really something I thought was worthy of a picture.  The only thing lacking was a bit of a rolled-up sleeve on the jacket. 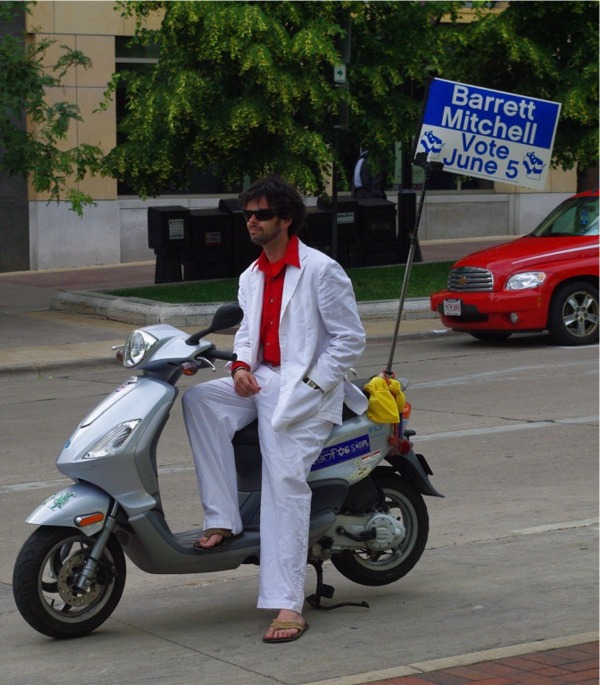 As the evening rolled along came one of those wonderful moments when quiet and thoughtful young men and women stood in silence and made a statement.

I am so very proud of Wisconsin, and the many people who made a point of making sure our government does not forget who is in control.  There was a conservative partisan power play by Scott Walker when state workers and public employees were attacked.  That forced the state into a recall election.  The people did not prevail at the polls, but the fight will continue in a new form.

We will not be stilled or made silent.

This is what I like to see.  Democracy in action!

Heavy turnout in Milwaukee led the city Election Commission to call out the reserves Tuesday.

The backup workers were needed to handle long lines, partly because a significant number of new voters were registering at the polls, Edman said.

“We knew things would be busy, but we didn’t know how busy,” Edman said.

In some cases, poll workers were shifted from less-crowded polling places to busier ones, Edman said. In other cases, she used poll workers who had agreed to be on call or city administrators who had volunteered to help out, she said.

“It ranges from 28 to 42 percent already; it is a huge turnout. We could hit 80 to 88 percent,” Peters said midday of Dane County’s turnout. She collected status reports from local clerks.

Extra poll workers were sent to some polling places in Milwaukee, mainly to handle long lines, the Milwaukee Journal Sentinel reported. The paper quoted an election official as saying part of the slowdown was due to the number of new people registering at the polls.

This is a most outlandish statement, given that Scott Walker whored for every dollar that could be found in the pants of a conservative, and then allowed his campaign to create awful ads that were aired endlessly.

Gov. Walker told supporters “I know in our household we’re ready to get our TV back. Where we can watch TV without all the commercials”

Why not Sarah Palin as Secretary of State?  It should be noted that this article does not mention that Scott Walker is the focus of a criminal investigation into his actions as Milwaukee County Executive.  Felons make poor choices as vice-president.  Just ask Spiro Agnew.

A victory (today) would make Walker the instant front-runner for the GOP vice presidential nod. Walker has a great story to tell. He took on the public-sector unions and did not back down in the face of protests, civil disobedience and the spectacle of Democratic state legislators fleeing across state lines to avoid casting their votes back home. By standing firm, he succeeded in implementing collective-bargaining and other common sense reforms that have saved Wisconsin taxpayers more than a billion dollars — turning a record $3.6 billion budget deficit into a $154 million surplus. And he did it while cutting property taxes and creating a business-friendly environment that has produced more than 35,000 new jobs since he took office. All this makes Walker the national poster child for taming out of control budgets.

It has also made Walker a hero to the conservative grassroots that Romney needs to energize. By turning Walker’s recall into a national cause, Wisconsin Democrats gave Walker the opportunity to rally conservative activists across the country and build a national fundraising network that has pulled in more than $31 million — nearly triple the $11 million fundraising record he set in his 2010 race. Walker is now a national political figure who has at his disposal a well-oiled political operation that could help Romney-Walker win not only in Wisconsin but across the United States.

Putting Walker on the GOP ticket would make Romney instantly competitive in Wisconsin. And it would force President Obama to spend time and resources defending a state he expected to be an easy win in November. Even if Obama succeeded in narrowly holding Wisconsin, the fight for the Badger State would divert precious resources from other battleground states. And if the Republican ticket did pull an upset in Wisconsin, Obama’s chances for a second term would be slim to none.