This will be fantastic!

The last time Bob Woodward and Carl Bernstein had a joint byline was in April 1976, with the Washington Post story from the “The Final Days,” on the Nixon-Kissinger, on-their-knees prayer scene the night before Nixon announced his resignation. This weekend the guys are back with a joint byline.

In addition the two journalists will be featured on Face The Nation with Bob Schieffer Sunday morning–check local listings for time in your area.

When asked how the CBS show landed the duo, Schieffer had the obvious answer.   “I asked them!”

Since the CBS news veteran was reporting during the days of Watergate this will prove to be the best of the lot among the networks come Sunday morning. 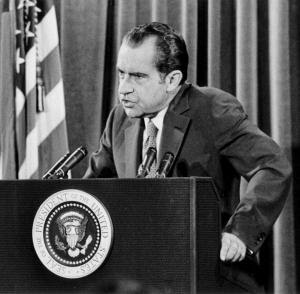 “The press is your enemy,” Nixon explained five days later in a meeting with Adm. Thomas H. Moorer, the chairman of the Joint Chiefs of Staff, according to another tape. “Enemies. Understand that? . . . Now, never act that way . . . give them a drink, you know, treat them nice, you just love it, you’re trying to be helpful. But don’t help the bastards. Ever. Because they’re trying to stick the knife right in our groin.”

It is amazing how the life and times of Richard Nixon, along with the Watergate crisis have so long enthralled me.  No other single person dominates more space on my book shelves than Nixon, and no other single event in our nation’s history has generated so much reading and probing on my part as Watergate.  From my years as a teenager watching Nixon resign, or in the past weeks enjoying Watergate, I am continually fascinated with this story.

As the 40th anniversary of the break-in nears, the famed reporters who led the journalistic investigation, Carl Bernstein and Bob Woodward, have written a powerful read about that chapter in our nation’s life, and conclude Richard Nixon was worse than we thought.

Today, much more than when we first covered this story as young Washington Post reporters, an abundant record provides unambiguous answers and evidence about Watergate and its meaning. This record has expanded continuously over the decades with the transcription of hundreds of hours of Nixon’s secret tapes, adding detail and context to the hearings in the Senate and House of Representatives; the trials and guilty pleas of some 40 Nixon aides and associates who went to jail; and the memoirs of Nixon and his deputies. Such documentation makes it possible to trace the president’s personal dominance over a massive campaign of political espionage, sabotage and other illegal activities against his real or perceived opponents.

In the course of his five-and-a-half-year presidency, beginning in 1969, Nixon launched and managed five successive and overlapping wars — against the anti-Vietnam War movement, the news media, the Democrats, the justice system and, finally, against history itself. All reflected a mind-set and a pattern of behavior that were uniquely and pervasively Nixon’s: a willingness to disregard the law for political advantage, and a quest for dirt and secrets about his opponents as an organizing principle of his presidency.

One step at a time, and soon the hill is behind you.

That character is Paul E. Singer, 67, a billionaire hedge fund manager who is among the most important Republican donors nationwide. In just one Manhattan fund-raiser last month, he helped to collect more than $5 million for Mitt Romney’s presidential campaign.

He steadfastly supports conservative candidates. He also steadfastly supports gay rights in general and marriage equality in particular. Along with a few other leading Wall Street financiers, he contributed and helped drum up the majority of the money — more than $1 million — that fueled the campaign for same-sex marriage in New York.

He has given nearly $10 million of his own money to gay-rights initiatives, including the same-sex marriage efforts not only in New York but also in New Hampshire and New Jersey. And that figure doesn’t include his assistance in tapping a broad network of donors for individual candidates. He was pivotal in rounding up about $250,000 apiece for the Republican state senators in New York whose votes for same-sex marriage provided its margin of victory in the Legislature.

Now, Singer says, he’s providing $1 million to start a new “super PAC” with several Republican compatriots. Named American Unity PAC, its sole mission will be to encourage Republican candidates to support same-sex marriage, in part by helping them to feel financially shielded from any blowback from well-funded groups that oppose it.

In an interview on Tuesday, he told me that he’s confident that in Congressional races, which would most likely be the super PAC’s initial focus, there are more than a few Republicans “who could be on the verge of support” or are “harboring and hiding their views.”

“And this kind of effort could be catalytic in generating some more movement,” he said.

The vocal qualities of Craig Morgan are most remarkable and deserve a triple set this morning.