James and I went to Hobby Lobby today for two picture frames, and some browsing.  I love the store, and when it comes to framing needs there is no better place to shop.

That will be the end of the nice things I have to say about the store in this post.

Once I entered the store, and started walking around I noticed the only thing missing was a mug of hot chocolate and a live nativity scene.  There were MANY aisles arranged with wreathes, garland, garish bulbs, and all things Christmas–enough to make me puke.

Did I mention this is JUNE 29th!  This coming week is July 4th.

The Hobby Lobby Corporation is very steeped in religion, and that is fine.  They are not open on Sunday–which I applaud– and seem to have plenty of nice folks who work the store. (OK, now that will be the last nice thing I have to say about the business in this post.)   But to commercialize Christmas in June makes me ill.

So I thought I would ask someone–nicely–about the need to have all the Christmas items up for sale.  I might add what the store did have arrayed for fall and Halloween was almost an embarrassment–in relation to all the stuff that is supposed to get you in the Christmas holiday mood.

The man I spoke to told me–without a trace of silliness in his tone–that due to some of the craft items already out for holiday creations, they felt a need to have everything Christmas displayed.  I might add, when I did a look at the Christmas craft section, it was not all that large, and probably would have survived just fine without all the holiday items from China already up for sale.

The man even told me he thought it was “awful” that other stores would have items up for sale before Halloween, but since the Hobby Lobby “is a craft store”……

There is never a good time to make a fast buck off the commercialization of Christmas…especially from a store that has a religious perspective.

As I neared the lady behind the register to check out I joked that I was there to get a Christmas tree….and without missing a beat she alerted me they are all in the back just waiting to be brought out for display.

I paid for the purchase James and I had bought, and walked out into the 90 degree sunshine.

That is to be expected since it is JUNE 29!

No one agrees with all the laws and policies of the nation, state, or city.  We might have differences with international relations down to the way the local unit of government plants trees on terraces.

But at the end of the day in a functioning society we accept the rules, and abide by the laws.  If we have reason to think laws need to be changed we work within the established process to find if there is enough support to make that happen.

What we do not accept as allowable is the flouting of laws just because we do not like them.  I know my VW could perform quite nicely at 70 miles per hour on the beltline, but I know that is not acceptable and therefore drive the speed limit.

However when it comes to Wisconsin Governor Scott Walker there seems to be a whole other layer to his moral DNA concerning what laws should, and should not be followed.  That is one reason there is a John Doe probe into his behavior while Milwaukee County Executive.

There probably is no reason to again state that I find Walker, following his actions over the past 16 months, as anything other than a complete embarrassment and failure as governor.

Now I can state, based on the news over the past 24 hours, that Walker is also a failure as a man.  He has no inner compass to operate on than pure political chicanery.  It is quite clear this morning that Walker’s integrity is dead.

Wisconsin won’t move to implement the federal health care law largely upheld by the Supreme Court Thursday, Gov. Scott Walker said, because he hopes the law will be repealed after the November elections.

Is this the way that we now are to expect leaders to act?

If an elected official does not like a law they can just not accept it, abide by it, or implement it?

Is this the type of behavior Scott Walker sets as examples for his sons?  Are they coming to think these shortcuts are a way to maneuver through life?

Those two boys already have Walker’s failing hairline in their DNA.  I just hope they do not also pick up the character flaws that Walker is now showing the nation.

God, what an embarrassment!

This is just one amazing moment in the first term of President Obama, and for the nation.  Following all the political tumult, came the decision by the Supreme Court on the health care law.  When events such as these play out around the country I am alway curious how the news is presented in the morning papers.  So if you are a lover of newspapers like I am…. 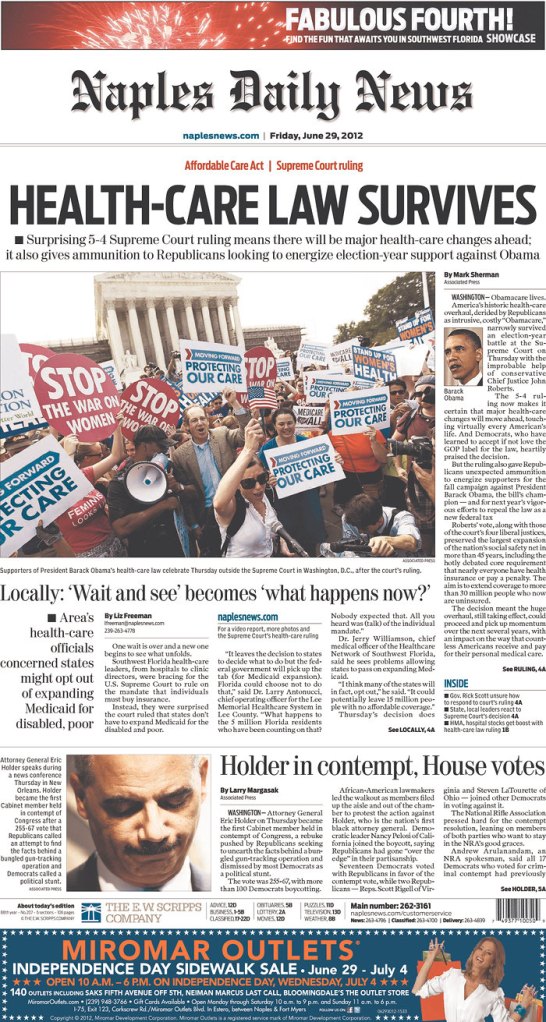 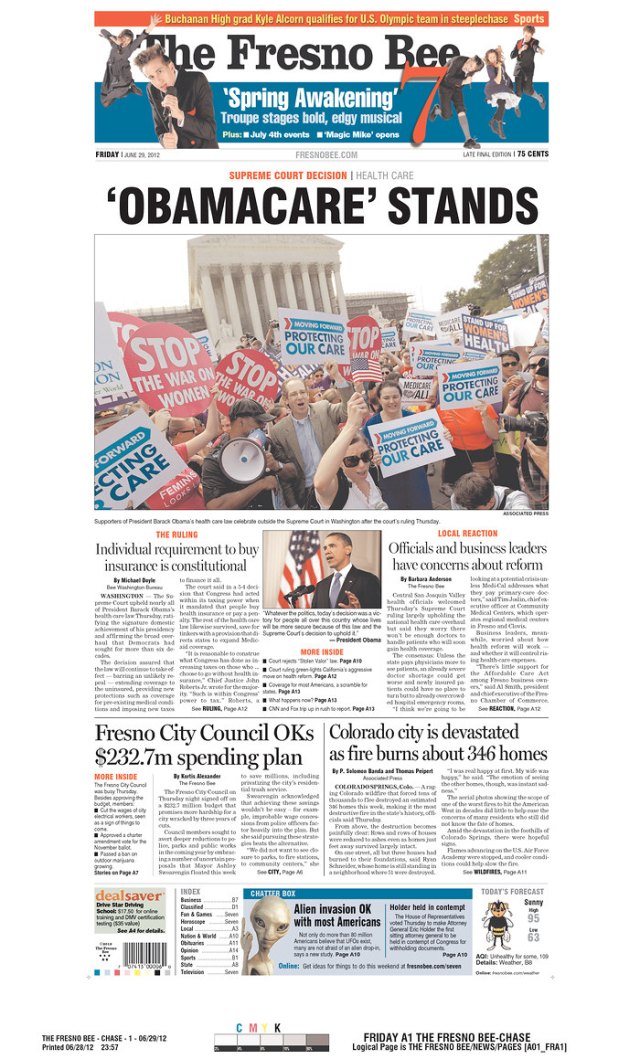 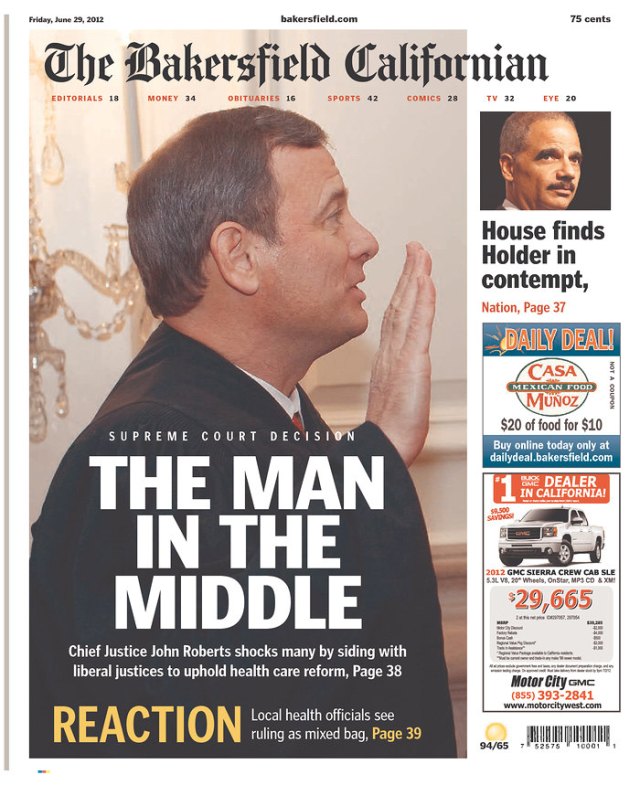 This was–in some ways–the second major story that took place on Thursday.  Everyone is talking about the massive embarrassment.

As Chief Justice John Roberts began reading his decision on the future of President Obama’s health care overhaul, the CNN team inside the courtroom jumped the gun, believing that Roberts was saying the individual mandate was unconstitutional and would be overturned.

A producer inside the courtroom, Bill Mears, communicated the information to a relatively junior reporter, Kate Bolduan, the face of the network’s coverage outside on the courthouse steps.

Bolduan then reported, on air, that the invidual mandate was “not valid,” citing producer Mears.

“It appears as if the Supreme Court justices struck down the individual mandate, the centerpiece,” of the law, she said.

Bolduan, a 2005 graduate of George Washington University who previously worked for a local news station in North Carolina, was named the network’s congressional correspondent last year.

The 29-year-old was also named one of Washington’s 50 Most Beautiful people in 2011 by The Hill.

Moments after Bolduan spoke, the false story began to metastasize inside the network’s online operation.

And a half dozen top on-air reporters and producers within the esteemed news organization told BuzzFeed they are furious at what they see as yet another embarrassment to a network stuck in third place in the cable news race, and torn between an identity as the leader in hard news and the success of their opinionated, personality-driven rivals, Fox News and MSNBC.

“******* humiliating,” said one CNN veteran. “We had a chance to cover it right. And some people in here don’t get what a big deal getting it wrong is. Morons.”

“It’s outrageous and embarrassing,” a third CNN staffer vented. “Maybe this will shake the company into understanding that CNN has not been the ‘most trusted name in news’ for a very long time.”

“It looked to all the world like the chief justice was going to strike down the law,” legal analyst Toobin later said on air, seeking to explain the CNN confusion.

It took CNN seven minutes to correct the error, from Bolduan’s initial report at 10:07 am, a warning from Wolf Blitzer at 10:11 am, and finally an on air correction at approximately 10:14 am. Inside the network, staffers debated blame, and some of Bolduan’s colleagues described her as a skilled professional who was misinformed by the veteran producer.