I think these two maps are helpful in understanding some of the internal dynamics playing out on the world stage.

The Ukraine is a split country.  The eastern party is heavily ethnic Russian, while the west is primarily Ukrainian.  Moreover, the Crimea itself was given to the Ukraine by the Soviet Union in 1954, when it didn’t seem to matter what was actually in Russia.  13% of the Crimea’s population are ethnic Tartar, who were brutalized under Stalin and oppose being annexed by Russia.

To Russian nationalists, the Crimea is an integral part of “Mother Russia.”  Yes, Ukraine has internationally recognized borders, and allowing Russia to change them with force violates fundamental tenets of international law.  However, the alternative might be civil war and bloodshed, for a conclusion that probably is no better.   The Crimea has been part of Ukraine for only 50 years, has hardly any ethnic Ukrainians, and would be a small price to pay to get true independence and the capacity to move towards the West.

Still, hardliners in Kiev do not want to give up any sovereignty, and there is fear that this could spiral into other conflicts.  If other former Soviet Republicans disintegrate into ethnic fragmentation the result could be cascading instability.

Yet when Abkhazia and South Ossetia broke from Georgia in 2008, it ironically made it easier for Georgia to pursue its own path without constant crises with Russia.  A Ukraine without the Crimea may be “freed” to turn to the west.   If Ukraine resists to try to keep the Crimea, that could be an incentive for Putin to up the ante, and take more of Ukraine – the places where ethnic Russians still make up a large part of the country.   So would Russia be satisfied with just the Crimea, or might it demand Ukraine be split on broader ethnic grounds?

Compare these maps – it is clear that the vote followed ethnic lines, meaning that Ukraine is an ethnically divided state.  It is not at all clear that it will be possible to avoid some kind of division, given that there appears to be no compromise between tilting west to the EU, or east to Russia. 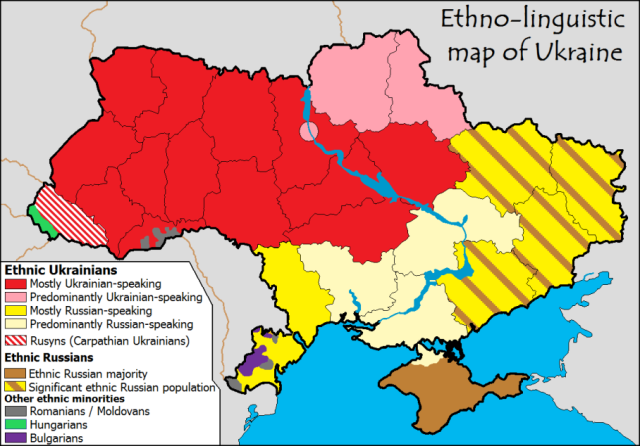 One thought on “Understanding Ukraine With Maps”