This afternoon WKOW TV is reporting that Wisconsin Governor Scott Walker doesn’t expect a bill similar to the highly controversial one that is roiling Indiana to be a subject brought up for debate in our legislature.  But after having been promised by Walker that there would be no urgency for the right-to-work bill readers might excuse me it I take a moment to ponder the possibilities.

Might it be so far afield to expect Senate Majority Leader Fitzgerald and Assembly Speaker Vos to suddenly discover an overwhelming demand and urgent need to pass a law and slam it through in a week.  If they did not need actual data to support a reason for the voter ID bill why would they need actual cases of intolerance against Christians when it came to this matter?

Might it not show ‘presidential timber’ for Walker to then sign such a bill to underscore his allegiance with evangelical voters in the early nominating states?  Perhaps he can gather Sue Armagost, Heather Weininger, and Jullayne Appling around as they all adoringly and approvingly look down on the signature being placed on the paper.  They can clasp the signing pens and use them only to record virtuous thoughts into the margins of their Bibles.

The truth is no one can really rule out the most absurd ideas from becoming a headline in this state.

And is that not a most sad statement to make about Wisconsin which was at one time a model for the rest of the nation to follow when it came to how government operated?  While I do not really think anyone in this state wants to track in the direction of Indiana I also never thought we would discard union protections or full respect for the University system, either.

Our state has come down a very long path that has, sadly, left many voters wondering how deep the woods really are, and if light will ever again break through.

This is most interesting.

I recall many  years ago reading Reporting Live by Lesley Stahl and how she described President Reagan as having a glazed over, spaced out look.  There are few who think that Reagan was not to some degree impaired while sitting in the Oval Office.  More evidence mounts to support that idea of Reagan suffering from dementia while in office..  To what degree that impacted him or as a result our nation will be left for more research and historical analysis to decide.

In an interview, Dr. Berisha said he did not set out to study Mr. Reagan, but found he was the only individual with progressive dementia for whom long-term transcript information is publicly available. He chose Mr. Bush because he was most comparable in age to Mr. Reagan at the start of their presidencies, and both men served during roughly the same decade.

Age and era are important issues for comparison because they can influence language measures. Mr. Reagan was 69 when he became president, and Mr. Bush was 64. Mr. Reagan died at 93 in 2004.

The researchers found no changes in the speaking patterns of Mr. Bush, who is not known to have developed Alzheimer’s. But in Mr. Reagan’s speech, two measures — use of repetitive words, and substituting nonspecific terms like “thing” for specific nouns — increased toward the end of Mr. Reagan’s presidency, compared with its start. A third measure, his use of unique words, declined.

The researchers’ methodology was not designed to determine whether the changes were present in Mr. Reagan’s rare early news conferences, Dr. Berisha said. Other factors — like a deliberate decision to reduce the complexity of his speaking style, or the injury, surgery and anesthesia from the assassination attempt made on him in 1981 — could account for the language changes they found, Dr. Berisha said.

In 1984, Mr. Reagan’s poor performance in his first presidential debate with Vice President Walter Mondale renewed questions about his mental capacity. A study published in 1988 suggested that Mr. Reagan had some cognitive impairment during his debates with President Jimmy Carter and Mr. Mondale, but the authors said that their findings were insufficient to conclude that the changes affected.

Finally, I am being heard by a corporation.  I have remarked many a time to James how nice it would be order a McMuffin anytime of the day.  And now with the bottom line woes driving decisions at McDonalds my desire is being to be met.  This idea will spread nationwide.

On Monday, McDonald’s said it will begin testing daylong breakfast—that means the Egg McMuffin, hash browns, and various other items—at certain restaurants near San Diego. Should the initial tests go well, the menu switch could end up being what McDonald’s desperately needs to get its business back on track. That’s because, by and large, people love McDonald’s breakfast.

I am currently not being paid by anyone for political advice.  As such I offer a freebie to Indiana Governor Pence who is trying to dodge the incoming blows and slams over his anti-gay signature to a bill that will cause gay people in his state to suffer from discrimination.

Start with stopping the false statements, or as many around the nation have come to know the words you have uttered as lies.  The first thing is to stop the bleeding and that begins with ending the furtherance of more falsehoods about the law.

Second item to come to grips with is that you had to call a press conference to somehow explain how a piece of crap can be picked up by the clean end means you have a huge mess on your hands.  This is the biggest political crisis of your career, and by staying on your current path means your media disaster will not only continue, but get bigger.

That’s my free part to your mess.

Reach out to me for the rest.

There is no way conservative Indiana Republicans come out of this anti-gay debacle with anything other than with their tails between their legs following a national pummeling.  This episode will be recalled for the speed and determination of a nation no longer tolerant of bigotry and those who do the dirty work to implement hate in legislation.  Republicans can not do head stands fast enough to stop the beating they are suffering.    This shows the power of a nation that has moved dramatically in the past years to bring about social progress.  This event also proves the skill and power of the gay rights movement to allow no safe quarters for the work of those who wish to undermine our rights. 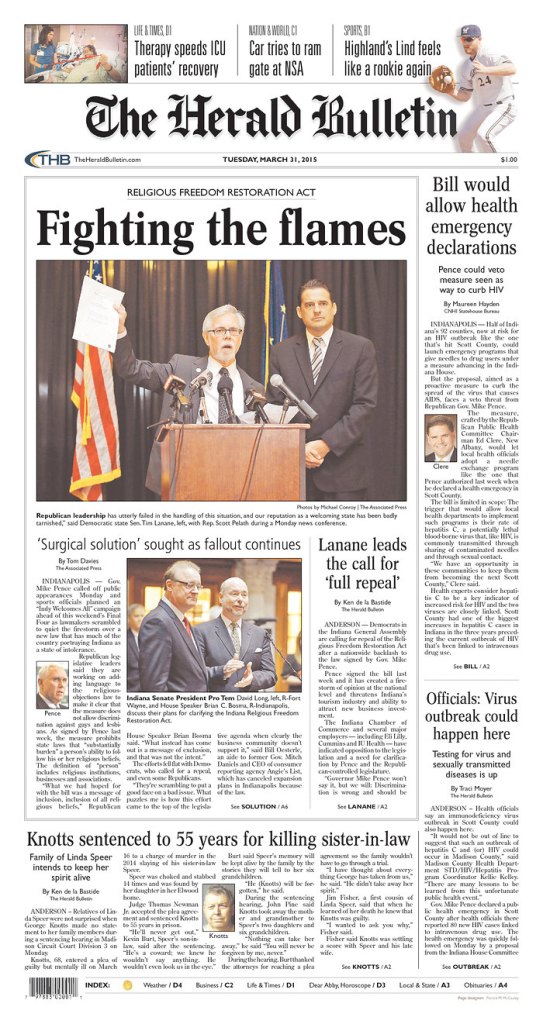 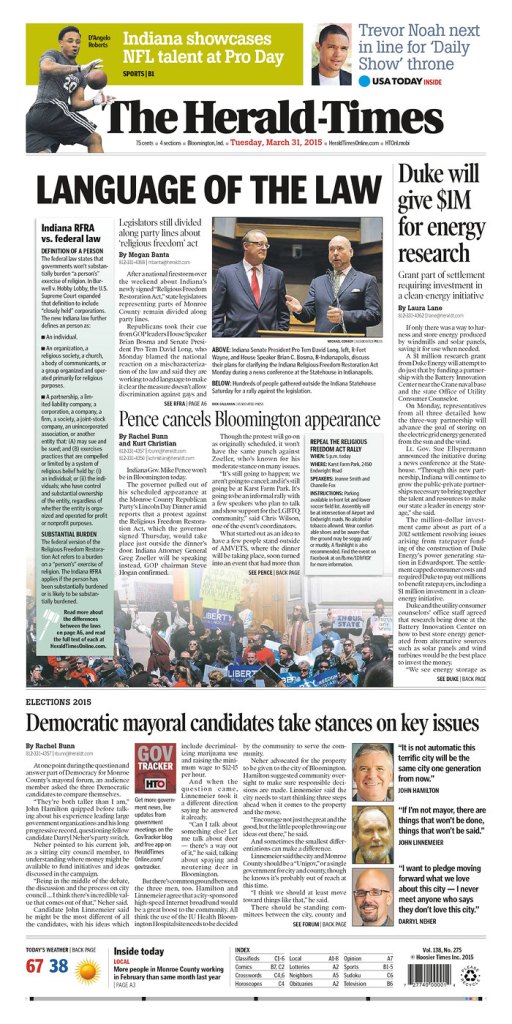 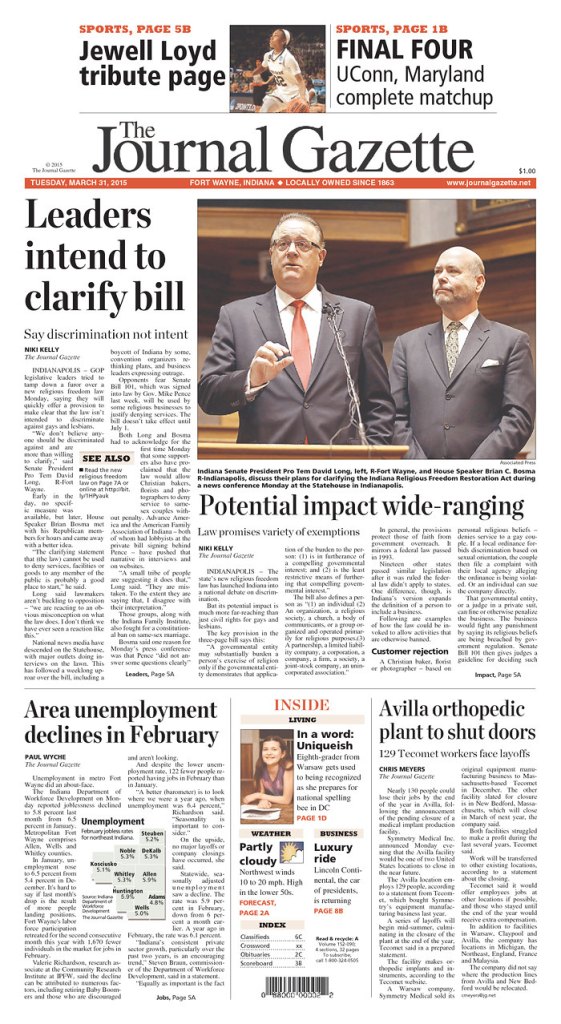 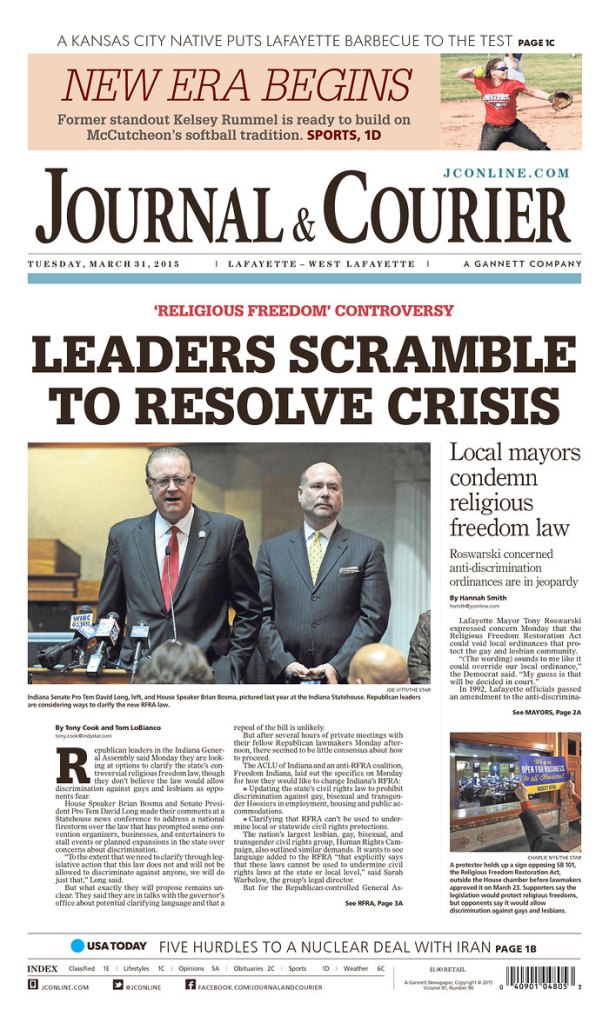 Updated.   I want to give the Hat Tip to Skip. 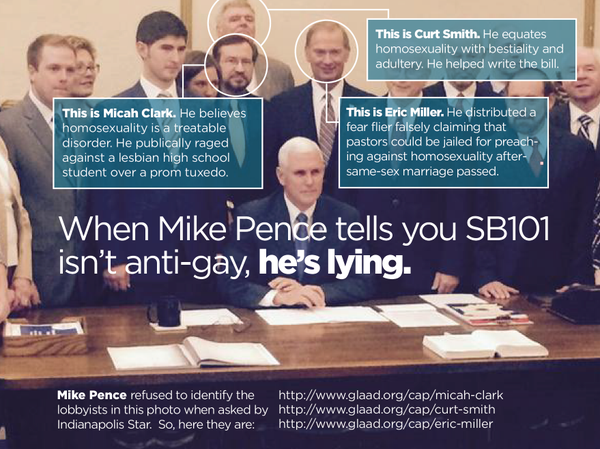 Thanks to a reader for not only writing the letter, but sending it to CP.  Write your own letter and send it here.

I was sorry to see Indiana take a stand against hospitality and decency with enactment of the right to discriminate law. We travel in Indiana 3-4 times per year, sometimes on trips to visit family farther east, sometimes to go to Indiana Dunes, staying in Michigan City as a mid-point and resting stop, playing in the casinos, stopping in Chesterton to get gas and eat at one of several favorite area restaurants. I have attended a conference in the very nice city of Indianapolis as part of my job with the State of Wis. No more. I hate to think that if someone drives up with a rainbow flag sticker on their car, or darker skin and an ancestral name on their credit card they may be denied service by “religious” people. Perhaps Indiana can re-institute separate drinking fountains and toilets, so that the “good people” don’t have to share intimate facilities with heathens and untouchables. Perhaps the bigots will fill your coffers and make up the difference.

You to can write and send a similar letter and make sure the recently enacted bigoted law in Indiana is repealed.

We can do this, America!

Tonight on the CBS Evening News there was time to air a video report about the new host of The Daily Show on Comedy Central but no time to have any report on the elections in Nigeria.

Is it any wonder people turn to National Public Radio and the BBC for news that impacts the world? 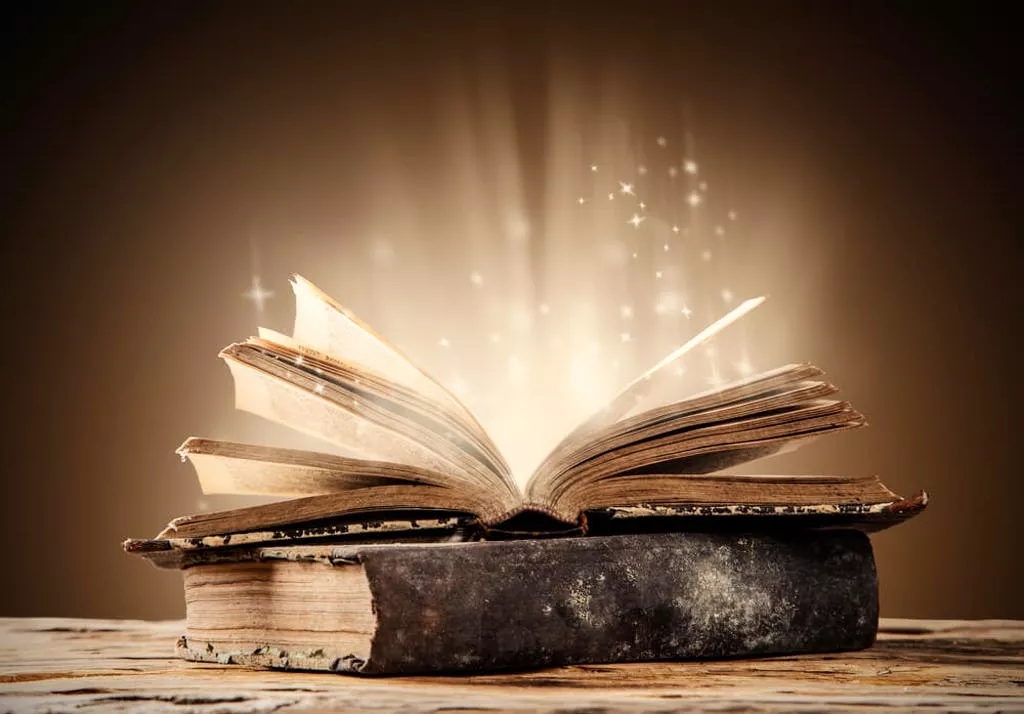