An informed source told Caffeinated Politics late Wednesday afternoon that amendments requested by Republicans for the final day of Joint Finance deliberations will make “heads blow up”. “It will be an early Fourth of July” when news of what is afoot becomes public on Thursday morning.

This news, given what has already occurred in the budget process, should make rational and educated citizens nervous.   There seems no limit to the conservative excesses this Republican controlled legislature wishes to engage.

More to come as developments occur. 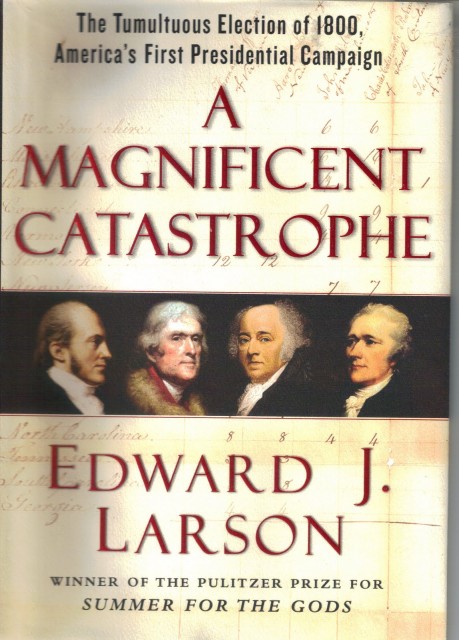 Several days ago I thought, with the Fourth of July approaching, that it would be fun to read a book about something associated with the Founding Fathers.  I went through my unread books and decided on A Magnificent Catastrophe by Edward Larson.   When I started it the first line jumped off the page and I had to stop and consider if it was not perhaps the best opening line to any book I had read.

The book is simply perfect.   The excitement of the 1800 presidential election which proved to be a barn-burner of a race featured John Adam and Thomas Jefferson in the first of what would become partisan and party affiliated features of our nation every hour years.   It was such a hard fought and intense election that year Jefferson would refer to it as “America’s second revolution.”

America is front and center as the news of the French Revolution made for unease, high taxes and a standing army created angst, and the possibility of war with France created political tension.  At the heart of the campaign was President Adams and his elitist Federalists who seem to delight in shutting down those who freely published their ideas that ran counter to the official line.  In opposition was Jefferson with his radically democratizing Republicans.  The personalities are huge, and the stakes higher than anything the political world of our new country had before encountered.    Add to the mix Alexander Hamilton and Aaron Burr and readers are set for a pure donnybrook that unfolds in about 300 pages.

The political intrigue as to how electors were chosen in such key states as New York and Pennsylvania, is in and of itself, a book within a book.  President Washington may have thought party politics to be an unwise force to encourage but it is nearly impossible to not understand how the political party structure started and once organized never could be stopped.  It is also easy to see how a whole array of characters such as James Madison, John Jay, James Monroe, George Clinton, John Marshall, Horatio Gates, and even George Washington himself all made political moves that created tensions that resulted in parties that would then fight it out at the ballot box.

As with so many other book I love, it is due in part, to the incredible research that the author engaged in while pouring over diaries and letters of the principal players as well as accounts in the newspapers of that period.  When I wanted a book to read about the Founding Fathers there was no better choice for me this week than A Magnificent Catastrophe.