White male suspect received first aid then was pronounced dead at hospital.  Officer shot suspect in home after he went for officer with pitchfork like tool.

James and I had just passed the house while on our walk down Morrison Street tonight at about 9:00 P.M where the shooting happened.  We had walked on about a block-and-a-half when we heard all sorts of police and emergency sirens and noticed they were passing behind us and heading to where we had just walked.

We circled back and the streets were blocked off.  We used the sidewalks and joined with neighbors from the area to see a victim on the ground in front of a home before the ambulance arrived.

Early reports–and this is based on very scant information–has a deranged person breaking into a home and needing to be brought under control via police enforcement. Early reports from locals had a person coming up from the shoreline and using a shovel to break windows and making entry to the home. Some in area heard two shots and headed for their basements.   Those in the home at the time were reported to have escaped.

The gunshot victim  was placed on a stretcher but I did not see a light in the ambulance as it drove away.

He’s an ignoramus whose knowledge of public issues is more superficial than an occasional newspaper reader’s. He casts his intellectual laziness as a choice, a deliberate avoidance of expert views that might contaminate his ill-informed opinions. He excused his failure to consult professionals before commenting on the Brexit vote by dismissing foreign policy advisers in general, including his own… He’s a charlatan, preposterously posing as a business genius while cheating investors, subcontractors, and his own customers. He’s rich because his father left him a great deal of money… He possesses the emotional maturity of a 6-year-old. He can’t let go of any slight, real or imagined.

Whatever Hillary Clinton’s faults, she’s not ignorant or hateful or a nut. She acts like an adult, and understands the responsibilities of an American president.

One drawing says it all. 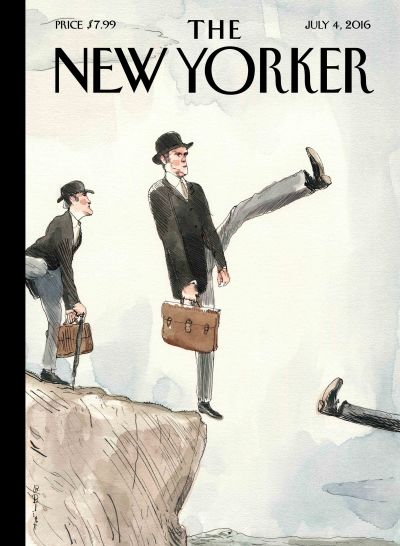 I was reminded again yesterday by a guy who lives in our neighborhood that there are a lot more stupid people in the world than smart ones.  We were talking about BREXIT  when the comment was made.  He was correct of course, the less educated are far more numerous and they have the same right to vote as everyone else.

Which brings me to Donald Trump and how so many of his supporters are not able to demand that he clarify his message, or more sadly, are not even aware there is a need for clarification.

Yesterday Trump made some of his boldest statements to date about his views of the economic state of affairs.   He promised to reinvigorate domestic manufacturing from steel to the electronics industry.  He blasted trade deals and globalization.   (Pretending that globalization can be, or should be, reversed is akin to re-introducing the Pony Express.)

This whole set of notions does not only rub up against international norms for the past decades but runs counter to the Republican agenda which has been advanced for generations.

But Trump’s latest lingo also runs counter to his long-held and argued views when he stressed the need for outsourcing and promoted globalization. His campaign does not even try to deal with the conflicting messages.

So that leaves it up to his supporters who are not strong on ‘book learning’ to listen, gobble it all up, and never question anything.

My friend was so correct when stating there are a lot more stupid people in the world than smart ones.

There is some interesting and rather exciting news for readers and followers of The New York Times.

Adam Nagourney, L.A. bureau chief since September 2010, and one of my favorite reporters for the Times, will go on leave for a year in summer 2018 to write a contemporary history of The New York Times, in the spirit of Gay Taleses’ The Kingdom and the Power — Behind the Scenes at The New York Times: The Institution That Influences the World from 1969.

Nagourney has called that work “the book which got me into this business in the first place”.  That book sits on a top shelf that overlooks my desk where I blog.   Next to Taleses’ book is Walter Cronkite’s A Reporter’s Life—if anyone cares to know.

In 1996 Nagourney stated with the Times as chief political reporter in 2002.  The yet-to-be written book will begin with Abe Rosenthal, picking up roughly where Gay Talese left off, and end with Jill Abramson’s tenure.

Nagourney is co-author with Dudley Clendinen of Out For Good: The Struggle to Build a Gay Rights Movement in America.

I am eager to read it.

Boris Johnson–one of the more repugnant vocal members of the Leave moment in Britain has unexpectedly ruled himself out of the Conservative leadership race.  The stunning news came after his key ally Michael Gove announced a challenge for the top job.

Speaking at a hotel in central London, where Johnson was to have launched his candidacy, he instead said “Having consulted colleagues and in view of the circumstances in parliament, I have concluded that person cannot be me.”

Well Hurrah for that.

(As a side note it is clear he does not have a gay hair stylist.) 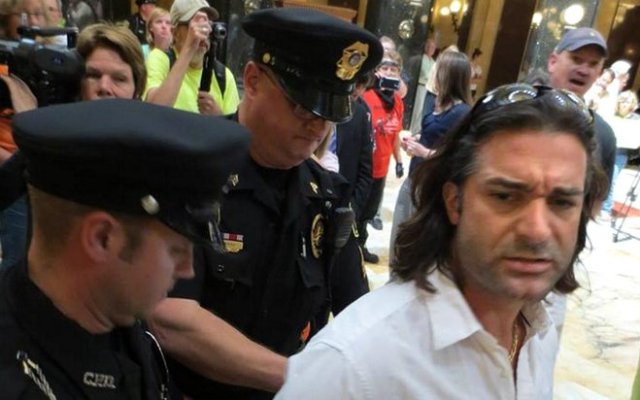 Dominic Salvia being arrested in 2013.   Credit: The Devil’s Advocates Radio

I was most heartened to learn that a local radio host will receive a legal settlement of $75,000 following a lawsuit which was filed against Gov. Scott Walker’s administration for being arrested in 2013 while covering the arrests of protesters at the state Capitol.

Dominic Salvia, co-host of Devil’s Advocates Radio Show, will be paid the money as part of an out-of-court settlement in a federal civil rights lawsuit.  The talk show host filed the legal challenge in 2014 against three Capitol Police officers who handcuffed and ticketed him during the July 2013 mass arrests of singing protesters.

There is no doubt that a most unseemly policy was being allowed to be carried out at the statehouse which sought to undermine protesters who felt strongly about Walker’s anti-union policies.  In addition there was ample evidence to show a court that in the case of Salvia constitutional safeguards for the press to do their job were being violated.

We all can agree that the circumstances at the Capital during ACT 10 were tense, messy, and at times out of control.  That goes for everyone from Assembly Republicans who convened their floor session a few minutes before its scheduled start and moved Walker’s bill toward final passage before members from the other side of the aisle could enter the chamber, to Democrats who shouted at the GOP while on the floor in February 2011.   The Assembly floor should be a place of process and decorum.

There were plenty of instances when this state did not present itself well to the nation.  But I think the lowest image we broadcast to the rest of the county was the attempts to limit free expression of opposing views.

It was awful to know there was a policy fostered to deny citizens access to the statehouse so to register their complaints–though loud and ill-timed as they may have been–or to have members of the press curtailed as they sought to cover the events in the halls of power.  It all was simply unfathomable to ones who care about constitutional safeguards.

Therefore there was no other outcome for Salvia–and more importantly for the process of democracy–than to have this legal victory.

I hope never again will there be such a flagrant disregard for the rights of people to convey their thoughts to elected officials or have members of the press cover the news.  Let this is a lesson learned!

I am very pleased to hear the news that a fix for Puerto Rico’s $73 billion debt crisis is close at hand.  A major procedural hurdle was passed today which all but guarantees that it will become law.    The Senate vote on cloture was 68 to 32 strongly suggesting that the measure will clear the chamber and reach President Barack Obama’s desk before Friday, when the island faces a default on $2 billion in debt payments.

I have previously made my views known about the need for this legislation, and strongly endorse the measure as it stands.   Nothing is perfect, but this bill is simply action that is required.

Puerto Rico has said it cannot make the debt payment, and has already defaulted three times on other debt.  If the bill is signed into law before July 1, it would preclude bondholder lawsuits over the missed payment.