This afternoon our doorbell rang and two people greeted us on the stoop.   They were canvassing for the upcoming election.  Both were excited and engaged and so desirous to vote themselves.  Each became a citizen this year and this will be their first election to cast a ballot.
The look on their faces, the ideas they wanted to share with us about why their candidate was most capable, and the gratitude they expressed about being a part of this grand process was a tonic for the soul.
We all have read and seen much that has left us unsettled about this cycle.   But like seeing Christmas through the eyes of a child it was a joy to see election hopes on the faces of new citizens.
It made my day.   Reconfirmed everything I have always felt about this nation. 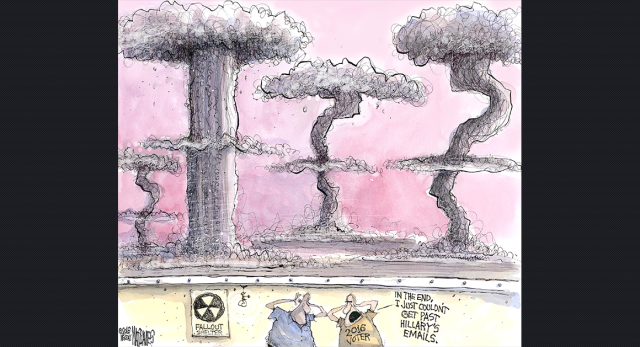 How the evangelical crowd can in any way accept the lifestyle choices of Donald Trump is a mystery that I still have not been able to wrap my head around.  This story does however underscore what I have long thought about Melania who slipped into the billionaire’s bed.  She stays married to Donald in light of the facts and in so doing defines herself.

The company that owns the National Enquirer, a backer of Donald Trump, agreed to pay $150,000 to a former Playboy centerfold model for her story of an affair a decade ago with the Republican presidential nominee, but then didn’t publish it, according to documents reviewed by The Wall Street Journal and people familiar with the matter. The tabloid-newspaper publisher reached an agreement in early August with Karen McDougal, the 1998 Playmate of the Year. American Media Inc., which owns the Enquirer, hasn’t published anything about what she has told friends was a consensual romantic relationship she had with Mr. Trump in 2006. At the time, Mr. Trump was married to his current wife, Melania. Quashing stories that way is known in the tabloid world as ‘catch and kill.’ … Mr. Trump and American Media Chairman and Chief Executive Officer David J. Pecker are longtime friends.

Quashing stories that way is known in the tabloid world as “catch and kill.”

This is going to be most interesting!

By combining proprietary, large-sample polls taken prior to Election Day with targeted, real-time tracking of voter turnout on Tuesday, VoteCastr will make rolling projections of how many ballots have been cast for each candidate in each of the states we’re tracking: Florida, Iowa, New Hampshire, Nevada, Ohio, Pennsylvania, and Wisconsin. If you visit Slate at 11 a.m. EST on Tuesday, you’ll see projections for how many votes have been cast for Hillary Clinton and Donald Trump in each of those states as of 11 a.m.

This, as you may have heard, is controversial. It will break a decades long journalistic tradition whereby media outlets obey a self-imposed embargo on voting information under the unproven theory that it might depress turnout on Election Day. But as our Editor-in-Chief Julia Turner put it this summer when she announced the VoteCastr partnership: “The role of journalists is to bring information to people, not to protect them from it.” For the first time, you’ll have access to the same kind of data that campaigns use to monitor voting activity and frame their thinking throughout Election Day. We teamed up with VoteCastr because we don’t think there’s any good reason the candidates and their teams should have a monopoly on that kind of information.

I thought this story was as important to read and digest as one about polls or voter turnout.  This story speaks volumes about the state of the race and the distance Donald Trump is from the main wide middle swatch of the nation who he needs to connect with Tuesday.

Hillary Clinton campaigned Friday in the company of friends and celebrities, first flanked by the billionaire businessman Mark Cuban in Pittsburgh and Detroit, and then at a concert in Cleveland with Jay Z and Beyoncé. High-wattage political leaders fanned out for her around the country: Her husband, Bill, stumped in Colorado, as President Obama rallied voters in North Carolina. By comparison, Donald J. Trump was a lonely figure. In the final days of the presidential race, Mr. Trump’s political isolation has made for an unusual spectacle on the campaign trail – and perhaps a limiting factor in his dogged comeback bid.

When it comes to bolstering Mr. Trump, the Republican Party is not sending its best: As party leaders have disavowed him or declined to back his candidacy, Mr. Trump has been left instead with an eclectic group of backup players to aid him in his last dash for votes. Though polls show Mr. Trump drawing closer to Mrs. Clinton, the most prominent Republicans in key swing states still fear that his unpopularity may taint them by association.

I am not of the camp claiming there is anything that will blow out the television sets on Election Night coming from Georgia, and yet……

One always hears that every vote counts–but in Florida that is perhaps more the case (again) than in any other state.   However, I have repeatedly pointed out the GOTV effort their by Clinton is strong and has been in full gear.

As of this morning the Secretary of State’s office reports, Republicans in Florida had cast 2.26 million votes by mail, or early, in-person. Democrats had cast 2,268,663, giving Democrats in Florida a lead of nearly 7,300 votes. Another 1,201,715 Floridians registered to neither major party also have voted … Robby Mook estimated Clinton was up 170,000 votes in the state that Donald Trump absolutely has to win. But those Clinton campaign officials could not or would not explain their optimism given that Democrats had a far bigger lead in votes cast four years ago. On the Saturday before election day in 2012, Democrats led in early votes by 104,000 votes. Obama went on to win Florida by about 74,000 votes.

It is hard to see a scenario where Donald Trump can win (given how the others states are lining up for Hillary Clinton) without Nevada.  And that is not going to happen.

Jon Ralston (@RalstonReports), Nevada’s top political reporter, tweeted at 2:41 a.m. EST that Democrats have built up an insurmountable lead in Nevada, and he expects them to carry the state based on returns in Clark County (the Las Vegas area). “Dems win Clark by 11,000-plus, will be ahead overall there by 72K-plus, more than 2012. May be game over in NV for GOP.”

Then there is this from Ralston.

Trump’s path was nearly impossible, as I have been telling you, before what happened in Clark County on Friday. But now he needs a Miracle in Vegas on Election Day — and a Buffalo Bills Super Bowl championship is more likely — to turn this around. The ripple effect down the ticket probably will cost the Republicans Harry Reid’s Senate seat, two GOP House seats and control of the Legislature.