There is no way to do the math to explain what happened tonight.

After having about an hour phone chat with my best friend, Brad, and doing some others things around home tonight the idea of having dinner somehow got misplaced.  So at 9:30 P.M. it became clear that the best thing was to get food somewhere.  James and I decided on Perkins, a quick place on the far eat side of Madison.

I pull into their driveway and as my car headlights move across an almost empty lot they bring into sharp notice a light blue-two toned VW Beetle convertible with side scroll work–one that is unlike any other car.  The same one I once owned!

The one that was smashed in a thunderstorm at our home in July, and soon after was reported totaled by my insurance company.

The one as we got out to inspect tonight that had the same numbered identity on the steering wheel to show that is was one of only 1,500 worldwide.  This could not be!

The car I loved so much was in front of my eyes.  It did not take me long to find in the almost deserted restaurant the lady who owned it.  As soon as I said “are you the person who owns a VW in the parking lot….”—she stopped me mid-sentence and started saying “are you the owner who had it….”

From there our two stories poured forth.  Her husband had found the car on an auction site, knew that it was special, bought it and restored it.  She told me that he wanted to find the owner and hear about the car.  Little does she know I have the story of the purchase written down–or how the purchase was more than just getting a new car. James gave a business card and I know we will talk soon.  I have some books and such from the car and will be pleased to give them as they really should be with the new owner.

I was so pleased to see what I loved was back on the road, glad to hear that in a couple weeks it will be placed in storage for the winter, and that is again has a good home.  I placed my hand on the trunk of the car and was truly happy how it worked out. 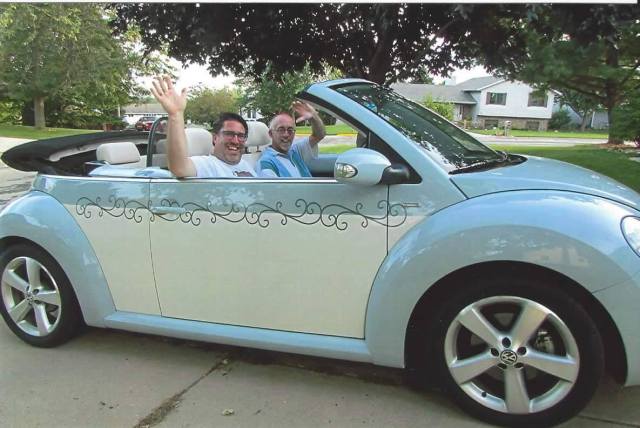 There is something so politically romantic about the story that plays out every four years in Dixville, New Hampshire.

Hart’s Location began midnight voting in 1948, though it gave it up for many years starting in 1964. A state law allows any small town with fewer than 100 voters to open polls at midnight and close them as soon as all registered voters have cast ballots.

Dixville was always too small to be recognized as an actual town–but with politicos like me the place is legend.  This is where midnight voters, the 20-some-odd folks who gather at the Balsams to cast the first ballots in the nation, makes for one of those American moments.  So many things change and get lost in the country for the new and different–and I am here to applaud the tried and true from this small location in the Northeast.

When I was working in Door County I recall getting the morning newspapers and reading about the amusing dateline concerning the folks who make a short trek to start the voting process on Election Day.

It’s probably not worth thinking too hard about what good the midnight vote has really done for Dixville. That the town has vanished is enough proof that being the “most important” voters in the nation isn’t all that valuable. But maybe that’s exactly why the vote won’t disappear without a fight: This area has had everything else taken away from it; they would at least like to hold on to their history.

And that is why I love this place.  Why it is a truly romantic place for those who still treasure true slices of Americana.

I think of every way to have fun…..

I predict the call for president with 270 Electoral College votes will come at 12:15 A.M. (CT)Wednesday morning with the call of Colorado. My reasoning has to do with close counts in states and a longer process to call states.

I might have had too much coffee today and also added to the natural adrenaline that comes a day before The Day–well…it makes my mind bounce about.  (James has had his patience tested–but he is still smiling.)  I was thinking, while getting a post ready once the votes come in shortly after 11 P.M. tonight, about a West Wing episode that plays nicely with what is about to happen.  Thank God for You Tube!

Political nerds and Aaron Sorkin fans may remember the West Wing episode, “Hartsfield’s Landing,” a fictitious nod to small towns in New Hampshire. In it, Deputy Chief of Staff Josh Lyman describes the small town of 42 people (Hart’s Location has 41) that votes at 12:01 a.m. and reports results at 12:07 a.m., giving the press something to talk about for 21 hours before anything else happens. At the end of the episode, a reporter describes the scene at the ballot location:

“Two roads, no traffic lights, a filing cabinet and a countertop in the clerk’s basement. But Hartsfield’s Landing, New Hampshire, is where democracy begins for the world’s only superpower. It’s 12:01 a.m., and the registrar of voters — who’s also the principal and only teacher at the Hartsfield’s school — calls the roll of voters.”

On the show, the fictional town had correctly predicted the presidential election — not just the Republican nominee — every year since William Howard Taft.

Years ago I worked in the legislature. Things were very different then. People would argue on the floor all day about different ways to do things, ideas, finances. But at the end of the day everyone would go out and have a beer or dinner and socialize. People had friends across the isle, very often good friends. People understood you had to work together to get things done which they did. They disagreed but generally respected each other. It was a fun and interesting place to be. Not anymore.

David Brooks nails it in his column today.

Over the past generation we have seen the rise of a group of people who are against politics. These groups — best exemplified by the Tea Party but not exclusive to the right — want to elect people who have no political experience. They want “outsiders.” They delegitimize compromise and deal-making. They’re willing to trample the customs and rules that give legitimacy to legislative decision-making if it helps them gain power.

I found this interesting.

For every homeless person in New York City, about six millionaires walk the streets here. That’s about 60,000 homeless people and 389,000 millionaires. Manhattan houses 70 billionaires, more than anywhere else in the world.

The one Donald Trump did not like because they were ‘picking’ on him?  Well….

It may not have been the most politically focused episode this fall, but Saturday Night Live’s ratings hovered near season highs during the last outing before Tuesday’s presidential election. Saturday’s installment averaged a 5.8 rating among households. In the key demo, the NBC show averaged a 2.8 rating among adults 18-49. For a live-plus-same-day score, that was only exceeded by the Oct. 22 episode

What took place last week on Fox News was truly remarkable as it underscored everything we all knew about this network.  They are not a real news network but instead a partisan affair aimed to help the Republican Party.  The low ball tactics they employ and the damage they do to our political process is without question.

Fox News chief political anchor Bret Baier has apologized for suggesting in a report last week that indictments were “likely” in an investigation of the Clinton Foundation, using wording that Baier later described as “inartful.”

Baier, who initially reported on the case Wednesday, said Friday “it was a mistake, and for that I’m sorry.” Hillary Clinton’s critics have accused her family of giving donors special access to the State Department when Clinton was Secretary of State.

Baier’s reporting, in which he said an indictment is “likely,” was refuted by ABC News, NBC News, CNN and other news outlets, although the reporting was picked up and repeated in conservative media. The Clinton campaign called the Fox News reports “baseless.” Baier apologized for the use of the word “indictment,” but said he and the network stand by their reporting.

That is bad enough–but then the shameless Kellyanne Conway made it worse.

Regardless of the veracity of the Fox News report, Donald Trump campaign manager Kellyanne Conway said Thursday night “the damage is done to Hillary Clinton.” “No matter how it’s being termed, the voters are hearing it for what it is—a culture of corruption,” she said.  Trump himself continued to talk about the possibility of an indictment over the weekend.

That is why we need to crush the Republicans at the polls Tuesday.  We need to teach them a lesson.