I would be most remiss if this blog did not post about Clare Hollingworth.  Perhaps the most famous woman reporter died at the age of 105 in Hong Kong on January 10th.

The newspapers at the time reported on the passing but it was the obituary in The Economist that made me again realize the power that one intrepid reporter can have on the world.    I recall as a teenager that Hollingworth was interviewed at length (perhaps by Dick Cavett?) and her long list of locales from which she had filed stories was breathtaking.  The places I loved to locate on a world atlas from the small town of Hancock were places she knew like the back of her hand.

I read this account in the weekly newsmagazine and really have to post a portion that is perhaps one of the best obituaries I have read in a long time.  Who would not have wanted to sit and talk with her a long time while drinking a pot of coffee?

She could swim, ride, ski, fly a plane and jump with a parachute. And shoot: during the war she slept with a revolver under her pillow; spares included a small pearl-handled one for her evening bag. Aged nearly 80, she was seen climbing a lamppost to gain a better look at the crackdown in Tiananmen Square. She once avoided arrest in Bucharest by staying wrapped only in a towel. Romanian secret police might strip a woman, she reckoned, but would not dress one by force.

Her wiles were legendary. She ruthlessly trounced rivals, broke rules and exploited an unmatched array of contacts. When India banned foreigners from covering the war with Pakistan in 1965, she cajoled the information minister, Indira Gandhi—whom she knew from a previous posting in Paris—into making an exception. She then asked to bring along two “servants” (in fact, they were colleagues). She had a knack for the telling detail: still-wet concrete in a Polish gun emplacement as the country buckled under the German assault, or insanitary plumbing in a supposedly advanced Chinese arms factory.

She quizzed and befriended generals, prime ministers and spymasters, politely but relentlessly. She gained the first interview with the last Shah of Iran in 1941; after his fall in 1979, he said he would speak only to her. Another scoop, in 1968, was the plans for peace talks to end the Vietnam war, brought to her in Saigon cathedral by an anonymous source. At an age when most journalists are contemplating retirement, she moved to Beijing to open the Daily Telegraph bureau. Though she spoke not a word of Chinese (languages were not her thing) she became a notable China-watcher. Scoops there included Mao’s stroke in 1974 and Deng Xiaoping’s rise. Both were met with scepticism; both proved true.

It all started in August 1939, when, aged 27 and a foreign correspondent for barely four days, she commandeered a British consulate car and drove into Germany from Poland. A gust of wind lifted a roadside hessian screen, revealing Hitler’s army, mustered for the invasion. It was to be the scoop of the century, though at first nobody believed her. On her return she had to produce her shopping—German products unavailable in Poland—to show she had crossed the border. 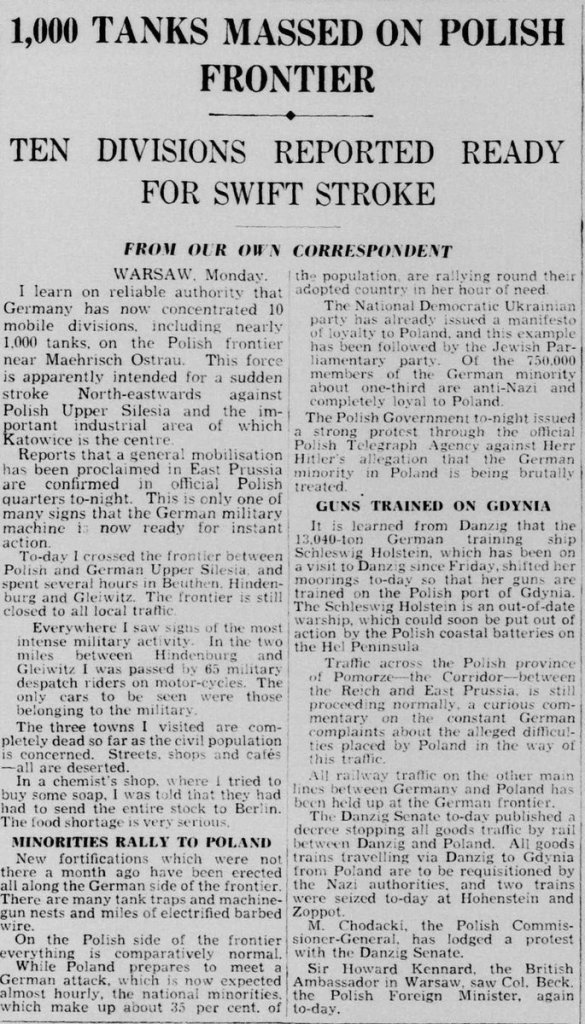 I was most satisfied to hear that Supreme Court nominee Neil Gorsuch told a US senator Wednesday that Donald Trump’s tweets about the judiciary are “demoralizing” and “disheartening.”

Ron Bonjean, who is leading communications for Gorsuch during the confirmation process, confirmed Gorsuch called Trump’s tweet about the “so-called judge” “disheartening” and “demoralizing” in his conversation with Blumenthal.

It is understood that Trump is not overly schooled when it comes to a whole raft of issues. The complexities of government and the structure of our political institutions may seem less important than his shopping for wives.  But I am most pleased there still are those mature voices who speak out and make it known how small Trump proves himself to be.

Donald Trump said something yesterday which was simply bizarre and most remarkable.  He used words like “biased” and “political” to describe any court that disagrees with the executive order he signed on Jan. 29  concerning his Muslim travel ban.  But Trump, in yet another stunning moment yesterday, stated his assessment of the U.S. Code meant a sitting president, “can do whatever you want.”

WHAT?  Nothing this sincerely troubling and outlandish has been uttered since Richard Nixon’s famous line in the David Frost’s interviews.

David Frost: Would you say that there are certain situations–and the Huston Plan was one of them–where the president can decide that it’s in the best interest of the nation, nd do something illegally?

Richard Nixon: Well, when the president does it, that means it is not illegal.

What Trump is trying to use as leverage in his attempt to implement his Muslim travel ban–a religious ban if allowed–would create for a most troubling precedent.  That would create damage as it sets the new boundaries and rules for our government. It confirms what Trump and Nixon argue for: When the president does it, that means it is not illegal.  Allowing that idea to stand unchallenged does severe damage to the republic.

There are all sorts of examples of why many are wondering what to do with an ever-more unhinged Donald Trump.  The nation is witnessing the unstable nature of Trump.  World leaders are deeply troubled by his erratic nature.   “I’ve been in this town for 26 years; I have never seen anything like this,” Eliot Cohen, a senior State Department and National Security Council official in the George W. Bush administration, told The Huffington Post. “I genuinely do not think this is a mentally healthy president.”

Huffington Post reports that Trump is rambling about at 3:00 A.M. and making calls about things that one really should already be aware.

Trump was confused about the dollar: Was it a strong one that’s good for the economy? Or a weak one? So … he called his national security adviser, retired Lt. Gen. Mike Flynn, according to two sources familiar with Flynn’s accounts of the incident. Flynn has a long record in counterintelligence but not in macroeconomics. And he told Trump he didn’t know, that it wasn’t his area of expertise, that, perhaps, Trump should ask an economist instead.

Trump was not thrilled with that response ― but that may have been a function of the time of day. Trump had placed the call at 3 a.m., according to one of Flynn’s retellings ― although neither the White House nor Flynn’s office responded to requests for confirmation about that detail.

Then there is this nugget. Trump spent much of a recent phone call with French President Francois Hollande “veering off into rants about the U.S. getting shaken down by other countries,” Politico reports.

Said one official: “It was a difficult conversation, because he talks like he’s speaking publicly. It’s not the usual way heads of state speak to each other. He speaks with slogans and the conversation was not completely organized.”

The Muslim travel ban from the Trump White House has made for a costly political mistake–on top of the undermining of American ideals.  The past ten days has been a messaging nightmare for an administration which thought resumes, experience, and facts do not matter.  But they do.  The absence of those ingredients has made for a national nightmare and allowed folks–the majority of voters in the nation–to be able to say ‘Told you so.’   And it took only a few weeks to make that statement.

History also has strong evidence to show that a religious test of the type Trump is hoping for is wrong and not in the theme of what made this country great.  The anti-Islamic nature of Trump and his cronies needs to be stopped.

This is not the first time that bigotry against immigrants has tried to make inroads in the nation.  In the years leading up to the Second World War, isolationist sentiment was running high.  Some misguided Americans feared that immigrants were a threat to the country.   At that time the map below, titled America–A Nation of One People From Many Countries, was published (in 1940) by the Council Against Intolerance in America to help educate those in need of some facts.

“With the exception of the Indian, all Americans or their forefathers came here from other countries,” the illustrator Emma Bourne inscribed on the map. The Council Against Intolerance commissioned Bourne’s work in an effort to remind Americans that the U.S. had always defined itself as a country of varied national origins and religious backgrounds. 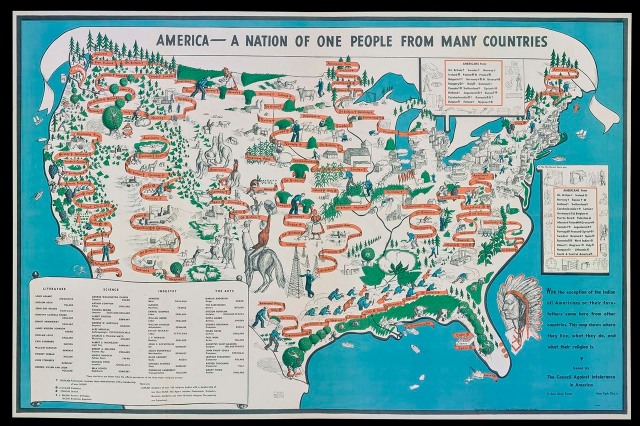