Every time there is a ‘fire-eater’ invited to a college campus in the nation there is another round of discussions about either the value of hearing ‘the other side’ or why shutting down ‘hate-speech’ is a necessity.  Paying for a white supremacist to disparage whole sections of a campus seems not only a real waste of money, but a loss for truly engaging conversation that might have taken place from that stage which was instead wasted on hate.  I have never quite figured out why college campuses would not invest in truly weighty thinkers, if you will, the modern-day William F. Buckley Jr. types from both sides of the divide, and let the issues flow.

I know I am over-simplifying matters with putting a white supremacist at one end and the erudite world of Buckley at the other.  But as one who does enjoy listening to speakers at UW-Madison I am not pulled in by the ‘hair on fire’ types but instead find the words from the likes of George McGovern or Robert Novak to have appeal.  (I was most fortunate to walk with the slow-moving Novak due to recovering from a hip operation down the length of Memorial Union and ask about how he actually wrote his columns–he did it with one take.)  I am surely not alone in wanting diverse thought presented in an adult fashion.   But that is no doubt what comes with some experience in life and my DNA.

Meanwhile much of the nation is embroiled with the topic of college speakers and those who wish to prevent certain views from being heard. 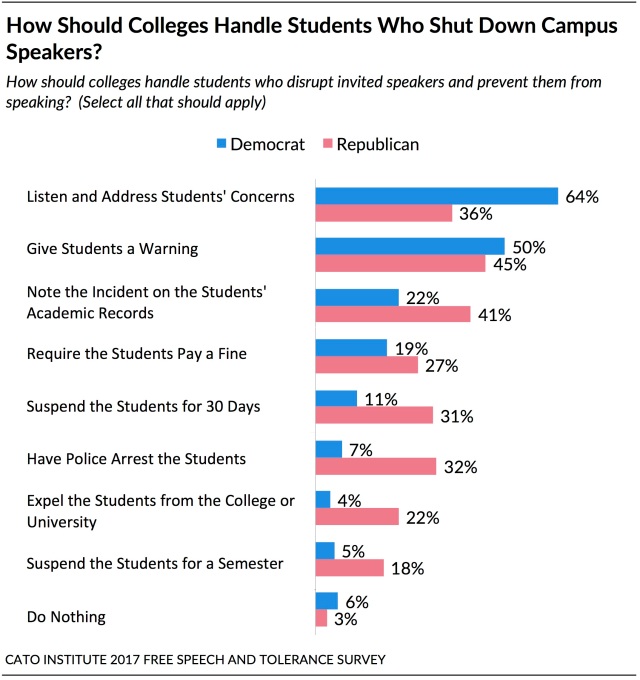 But what smacks me as most unfair, however, is how some of these stories about the most incendiary of speakers, and the reaction they get, always is cast as a ‘liberal’ attempt to stop free speech.  History of course shows that conservatives have had their share of stopping free speech and even threatening the peace to make their points.  That seems to never get as much attention.

Leading up to the Civil War there was a very concerted effort made to stop any independent thinking at Southern universities that did not meld with the pro-slavery rhetoric that had taken over the planter elites and their paid-for politicians.  When a chemist professor at Chapel Hill stated he would vote for the 1856 Republican presidential ticket if it should be run in North Carolina he was met with students burning him in effigy.  The Raleigh Standard called for his ilk to be “silenced or…be driven out.”

Time and again to shut down the ideas advanced by abolitionists the pro-slavery crowds would dismantle the printing presses and in some way destroy them.  Throwing them in a local waterway was a sure-fire way to stop pamphlets from being printed.

Over the past decades casting blame on the press has been an applause line for many a Republican candidate running for office.  But since the entry of Donald Trump onto a political platform that notion of attacking the press has only deepened.    And it is troubling for our nation.

But where are the conservatives who have no shortage of words when it comes to speakers on college campuses, but are left tight-lipped when the national press is under verbal attack in Stalin-like style?   By remaining quiet on this matter of reporters and the work they do in our democracy a most concerning development is taking place.  We simply must think these matters through with more attention paid to the larger notion of what our country is about and what we wish it to remain.