I am always desiring to have a citizenry informed about the news and events of not only our country, but also the world.

One of the truly important, and also inspiring stories, took place Monday in Zimbabwe as millions of people voted peacefully in the first election since the long-overdue ouster of Robert Mugabe.  The election was no small thing.  The outcome will go a long way in determining the former British colony’s future for decades.

I went to bed last night listening to BBC radio for updates, and spent the day with either newspaper accounts or media updates via the computer.

But when turning to the evening newscasts on major networks in the United States I found what can only be described as a severe lack of sound editorial direction.   Neither CBS or NBC had a single mention of the story--with CBS not even having a mention of ANY international news.   NBC decided to carry a closing story about a basketball player.

Many minutes were spent on the large and raging wildfires in California.  Yes, they are news and impact many lives.  But from a news editor perspective the stories and images of the fires have been on the nightly broadcasts for a week, and nothing appreciably different occurred Monday.

Meanwhile a very significant vote was underway in a major African nation, where for the first time since Zimbabwe gained independence in 1980 after a brutal guerrilla war against a white supremacist regime, Mugabe was not on the ballot.

And it deserved coverage!

Thankfully each evening in our home we record on the DVR the BBC World News.  The BBC continuously provides full coverage and insight about the world.  It is due to the shortcomings of programs, such as the network newscasts this evening, which help create a citizenry that is under-educated about international events.

“Prosecutors intend to prove that Manafort made that much and ‘failed to report a significant percentage of it on his tax returns,’ according to a filing by Mueller on Monday in federal court in Alexandria, Virginia. Jury selection begins Tuesday in Manafort’s bank- and tax-fraud trial. …

“ome exhibits also show how some Ukrainian oligarchs paid Manafort through foreign accounts, particularly in Cyprus. The indictment of Manafort said he made ‘tens of millions’ of dollars in Ukraine from 2006 to 2015, moved money from Cyprus to pay U.S. vendors to fund a lavish lifestyle and avoided paying taxes on income by disguising it as loans from offshore shell companies. It said that $75 million flowed through the accounts and that he laundered $30 million.

From the conservative Wall Street Journal comes good news for those angry white men who wanted to blame their employment woes on President Obama and all things related to China.

“Candidates have so many options today,” said Amy Glaser, senior vice president of Adecco Group, a staffing agency with about 10,000 company clients in search of employees. “If a company requires a degree, two rounds of interviews and a test for hard skills, candidates can go down the street to another employer who will make them an offer that day.”

Ms. Glaser estimates one in four of the agency’s employer clients have made drastic changes to their recruiting process since the start of the year, such as skipping drug tests or criminal background checks, or removing preferences for a higher degree or high-school diploma.

In other words, all those white men who voted for Donald Trump now have places to apply for work.  America is great when a person with no education or skills can be plucked off the street and given a task that a sixth grader could accomplish.   Bubba’s minimum qualifications which landed him a job will be part of the talk from his bar-stool real soon.  Yee-ha!

Like Loading...
“Sex and the City” star Cynthia Nixon is running in the New York primary for governor. It has been a lively race against Gov. Andrew Cuomo. I am one who thinks experience matters–so the person I support in the September primary is clear. The long article today are for those who love a great political read–from a state with a storied past when it comes to great political events.
Mr. Cuomo’s team has alternated between projecting nonchalance about the challenge — while taking care to highlight his success with left-leaning causes like marriage equality and raising the statewide minimum wage — and casting Ms. Nixon as a clueless entertainer.
“It’s clear that voters don’t believe she has the chops,” said Lis Smith, a Cuomo campaign spokeswoman.
Questions about her experience are both fair, Ms. Nixon said, and plainly gendered.
“If I were a man with exactly the same résumé, I would not be getting this question to the extent that I am,” she said.
She acknowledged that her campaign operation, with a few dozen paid staff members, the majority of them female, is the largest entity she has overseen. In a 40-minute interview, Ms. Nixon initially laughed when asked to describe her management style, before settling on “collaborative” and “opinionated.” Her critics have been less generous, though at times their efforts have backfired. When a Cuomo supporter, Christine C. Quinn, the former City Council speaker, called Ms. Nixon an “unqualified lesbian” — Ms. Quinn is also a lesbian — Ms. Nixon’s campaign printed the phrase across official T-shirts. It became a best seller.

Job growth has been on a roll since the recovery began in 2010. Obama finished out his last 18 months with stronger employment gains than Trump has over his first 18 months. 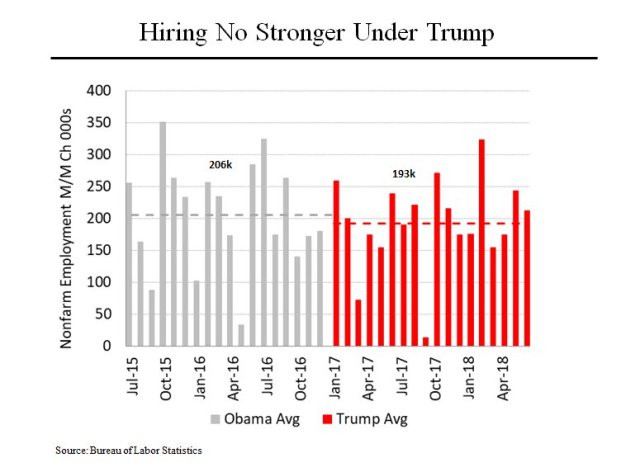 Real wage growth under Trump fell flat over the past two months and have been running decisively slower than under Obama.