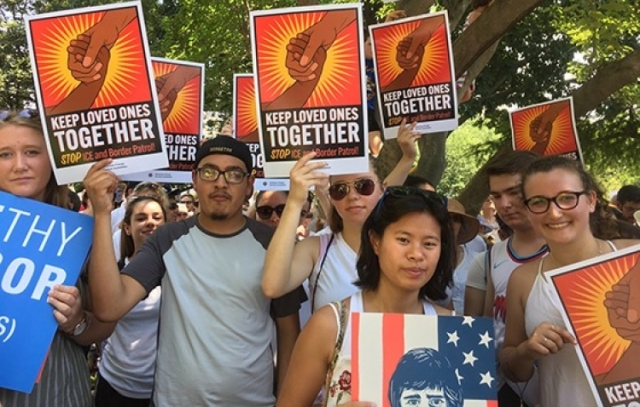 Donald Trump said Saturday that he was delaying planned weekend federal immigration raids to see if Congress can “work out a solution to the Asylum and Loophole problems at the Southern Border. In a tweet, Mr. Trump said he was taking the action at the “request of Democrats.”

Immigration agents had been planning to sweep into several immigrant communities in 10 major cities — including Miami, Los Angeles, Baltimore and Chicago — beginning on Sunday. Officials said on Friday that they had targeted about 2,000 families in a show of force intended to demonstrate their strict enforcement of immigration laws. Children of immigrants — some of whom were born in the United States — had faced the prospect of being forcibly separated from their undocumented parents.

Here is the bottom line….From “millions of illegal aliens” to “about 2,000”, and ultimately zero, in just a few short days. Stand by for the next announcement on immigration, sometime during the Democratic Presidential debates next week, because this is a political stunt, not an emergency.

This never-ending loop of creating crises and drama then backing down is playing to his base of sheep, but makes this nation look foolish. He only adds to the look of being weak-minded and indecisive.

Trump said his delay is to allow time for Democrats to act on the issue. But here is the problem with that line of thinking. Congress is busy trying to figure out what to do with another artificially created crisis of his own making, that of Iran.