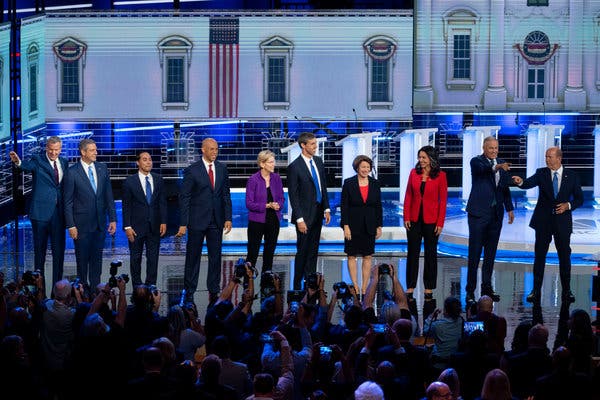 No one was berated on national television Wednesday night as ten Democratic presidential candidates sparred on issues and policy moves as the process for the party nomination moves forward.  It was most refreshing not to have a candidate talk about the looks of another candidate or the size of his body parts.

E.J. Dionne, Jr. put into print what I thought after the first hour of the debate.

It was impossible to watch this serious exchange of views and not ponder the 2016 Republican debates and their dominance by Donald Trump and his antics. No Democrat (and we can be thankful for this) tried to stand out in the ways Trump did. Their swipes at each other, such as they were, were mostly subtle, respectful and substantive. No talk of small hands or low energy. Perhaps that reflects a collective Democratic campaign promise: No more indecency, no more recklessness — and, it is not too much to say, no more idiocy.

Just another reminder of how far this nation has fallen that we even need to compare and contrast such matters—and manners–among the political parties in this nation. Can you image Ronald Reagan in 1980 talking about his penis in a debate as Donald Trump did in 2016?

Voters will get a chance to see 20 Democratic presidential candidates on stage together in Miami starting tonight.  Ten tonight, ten tomorrow night.  These are the first debates of the 2020 campaign season. There will be no opening statements, 60 seconds to answer questions, 30 seconds for rebuttals, and a one-minute closing statement.

The debate starts at 9 p.m. and will be broadcast on NBC, MSNBC, and Telemundo, and streamed live on Twitter and YouTube.

This rips at the heart.

Her father tucked her inside his T-shirt and she clung to him, her tiny arm wrapped around his neck, but the raging waters carried them away as they tried to cross the Rio Grande from Mexico to Brownsville, Texas. The bodies of Salvadoran migrant Oscar Alberto Martínez Ramírez and his 23-month-old daughter, Valeria, were found washed up in Matamoros, Mexico, earlier this week. His wife, Tania Vanessa Ávalos, told Mexican authorities she watched her husband and child disappear in the strong current. (This photograph was first published in the Mexican newspaper La Jornada.)

This family is from El Salvador, the deadliest place in the world that is not a war zone. It’s a truly horrific place to live. Gangs operate with impunity in at least 247 of the country’s 262 municipalities.

They terrorize the multitude of neighborhoods they control, according to Human Rights Watch, forcibly recruiting children and subjecting many women, girls, and LGBT individuals to sexual slavery. If you resist, you will be killed, raped, or — if you’re lucky — simply kicked out of your home.

They brutally engage in extortion, human smuggling, and drug trafficking.

About 33 percent of Salvadorans live in poverty, which the World Bank defines as income of less than $5.50 a day. Average per capita income is $324 a month.

For two months, the Ramírez family had been waiting in an overcrowded migrant detention camp in Mexico that didn’t have enough food and in blistering heat of more than 110 degrees. They wanted to make an asylum claim to enter the United States legally, but ran smack up against Trump’s “metering” policy, under which border officials have slashed the number of asylum claims they process each day, from dozens to just a handful. The result is a huge spike in the number of people trying to cross the border between ports of entry.

According to the Associated Press, two babies, a toddler, and a woman were found dead on Sunday, overcome by the sweltering heat. Three children and an adult from Honduras died in April after their raft capsized on the Rio Grande. A 6-year-old from India was found dead earlier this month in Arizona, where temperatures routinely soar well above 100 degrees.

Crushed by poverty and terrorized by gangs, desperate migrants like the Ramírez family look longingly to their rich northern neighbor, willing to risk their lives on a dangerous, uncertain journey because the certain alternative at home is so much worse. They believed in the promise of America. 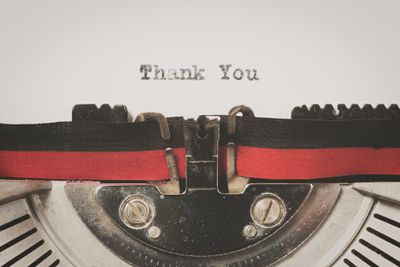 It is a sign of how effective reporters are when watching how upset Trump administration officials happen to be on any given day.

The latest moral outrage comes as Trump and Company are upset that they got caught mistreating more than 300 migrant children separated from relatives and living in horrid conditions at a detention center in Texas.  How do we know such conditions existed?

Because reporters who report and write for the the AP and The New Yorker broke the stories.

We know that Stalin, the Soviet Union’s “Man of Steel” still has his words about the press repeated by Trump.  But for the rest who value truth and information we say thanks to the reporters who allowed us access to information about the conditions of the children.  It was the Associated Press who first reported accounts from lawyers who visited the facility and found toddlers who were dirty, hungry, and inconsolable, and older children who were struggling to take care of them. Some had been held there for three weeks; 15 children were sick with the flu and another 10 were in medical quarantine.

The value of the work these reporters did has the stamp of history upon it. It will be noted in 2019 this is how the United States handled small children.  At the same time the party in power in the White House was working to stop abortions they were not caring for the children who had already been born.

History will also show why these children were treated so terribly by the conservatives in this land.

Because they were brown.

No other time, than the one we now live in, could a president allow this to happen to immigrant children and the GOP sit like neutered dogs. This is where we now are–and historians will write about it for future generations.