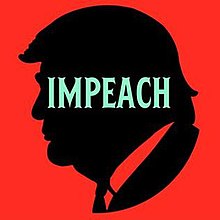 I have made the case before that our nation needs to send a strong message to those who will read of this time in which we now live.  Those far down the generational line will need to know what we did at a time when a would-be autocrat broke laws, undermined political institutions, bashed the press and attempted to institute ‘alternate facts’.  What did we do to stop Donald Trump, and what did we do to register our alarm for his trashing of law and order in our national government?

I know that some make a strong argument as to why, from a political strategic point-of-view, it would be best for the Democrats to hold off on impeachment proceedings.  That line of lingo says to pace ourselves and plan for strong campaigns to remove him from office in 2020.  I admit there are aspects to such thinking that does resonate.

Except it misses the main point that I firmly believe must be addressed.  The actions of Trump are so vile and outside the norms of presidential behavior they demand a response that is equal to the gravity of his deeds.  If we fail to act it will be shown that we were on the wrong side of history.

The reasons to unite for impeachment are required based on his attempt to obstruct justice.  Multiple times.  While we should all agree that his behavior over the past ten days is simply abhorrent when it comes to ginning up racial fervor, and calling for people to “go back’, it is the level of his in-your face obstructionism during the Robert Mueller investigation that is the most untenable.

Read historian Joesph Ellis’s work, in many volumes, as he breathes life back into the Founding Fathers.  They were concerned about the abuse a future president might heap upon the nation. They well understood the fragility of what they were attempting to create with a new government.  They grasped how such abuses could very well undermine the democratic process.  They knew that the ‘next’ election might not be soon enough to deal with a dangerous president, and that our republic might need a faster remedy.

So they placed into the Constitution for such a need the power of impeachment.  In Trump’s case, what the Founders devised, hits both of their fears.  First they wanted to make sure a president was not subverting the rule of law.  They also wanted to ensure that a president was not pursuing his own self-interest at the expense of the general welfare. With the most unsettling relationship Trump has with Russian President Putin the latter fear is most obvious.  With how Trump obstructed justice in relation to the Mueller investigation it is clear subverting law was his prime intention.

It is time to act for a return to law and order, sanity in government, and the return to the normal fashion of how government must operate and function.

But it also is imperative that we register for the pages of history that we took our role as caretakers of this republic seriously.  We need to demonstrate that what Trump has done is not not normal or legal, and has a constitutional remedy.  It is our duty to ourselves, and those who follow and learn from us, that we take such responsibility resolutely.