There is good news to report for those who know it is important to hold gun manufacturers accountable for the deadly weapons they produce and market to the nation.

Today the Supreme Court let it be known they will not block a lawsuit against Remington Arms, the company that manufactured the Bushmaster AR-15-style rifle that a gunman used to slaughter 20 kids and six staff members at Sandy Hook Elementary School in Newtown, Connecticut in 2012.   What the court actually did was opt not to hear the gun-maker’s appeal.  The justices did not include any comment about the case, Remington Arms Co. v. Soto, as they simply turned it away.

Like so many other Americans I was simply horrified at the shooting of those children, and then frustrated and saddened that no national movement was made with gun control as a result.   The news about this lawsuit may be the last opportunity to not allow those young boys and girls to have died in such fashion with no meaningful changes to our gun laws.

The suit, filed in Connecticut state court by a survivor and relatives of nine victims, says Remington never should have sold such a dangerous weapon to the public. The suit also claims that Remington deliberately marketed the rifle to young, at-risk males, including by placing it in violent video games.  Pretending that there is such immunity to gun-makers and dealers from prosecution over crimes committed with their weapons of public slaughter that no lawsuit can challenge them must not continue.

Therefore the news of the Court not limiting progress with the lawsuit is good news, indeed.

One of the side issues about our society that intrigues me at times, and frustrates me at other moments is how masculinity is perceived, and in relation to this case, how it is marketed.

One of the plaintiffs in the lawsuit is David Wheeler, whose 6-year-old son, Ben, was shot and killed in the school.  Wheeler told NPR earlier this year in an interview that he recalled one of Remington’s ads for a gun that carried the tagline, “Consider your man card reissued.”

“What kind of society allows manhood to be defined in this way?” Wheeler asked.  I know there is a tremendous amount of educating and social training required to move the needle when it comes to how masculinity is defined.  One of the ways we can start, and have a major impact on limiting violence in this nation, is to constrict how gun manufacturers are allowed to operate.

This is not the first time I have called attention to the truly sick element in our nation who have a fetish for guns.  I raised the issue in 2009 when pink rifles were being sold for young girls.

Thankfully’ we now have manufacturers that pump out children’s weapons designed for that young person who wants to go wild boar hunting, or who needs to slay someone.  We all know a kid would not want to have just any old run-of-the-mill style rifle to kill the beast or commit the murder.  I mean how embarrassing to talk trash with your buddies about what ‘went down’, and need to admit it all happened with just a ‘plain jane’ of a weapon.  What any fashionable and trendy kid needs are a designer model.  How ’bout pink!

There is no end to the avenues the makers of deadly weapons will take to prey on those most suspectable to their ads, marketing, and fear-mongering.  Therefore, it is most important that reasonable men and women, such as those who are pursuing this lawsuit, be allowed to move forward.

I am pleased that the Supreme Court allowed that to happen today. 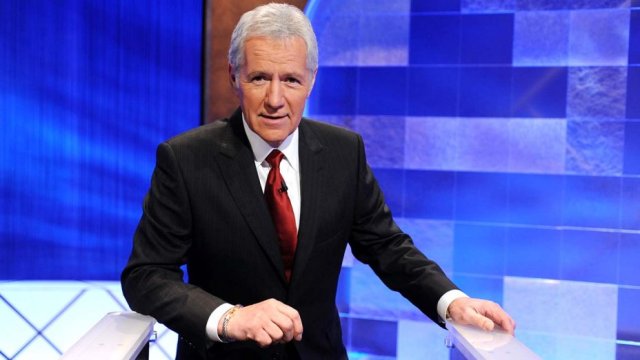 A contestant on Jeopardy last night brought a tear to host Alex Trebek’s eye.  It was one of the moments of our humanity that is bringing America together this morning.

The contestant, Dhruv Gaur, didn’t know the final answer, so instead, he wrote on his card, “What is … We [love] you, Alex!” (He drew a heart in place of the word “love.”)

Trebek, who is undergoing chemotherapy for Stage 4 pancreatic cancer, was caught off guard and had a bit of trouble continuing. Gaur later tweeted, “I’m just very grateful I got the opportunity to say what I know everyone was thinking. Sending all the love.”