If you sit on a bench at B.B. Clarke Beach or notice certain Hosta plants at lawns in the area you are seeing a part of Henry Dudek.  Many new faces in our neighborhood never knew Henry, while older residents will warmly recall him.  May 11th is the anniversary of his death and I want to take note of the man.

Henry had over 26 varieties of Hosta at his home and was always dividing them and giving plants away.  He would never entertain the idea of selling them, as he wanted to share his garden, and encourage others to grow their own.  He even at one time planted a full garden of glorious blooms, with his own resources, on a neighbor’s lawn so to further beautify the neighborhood.

I first met Henry when he worked in the state’s budget office.  My legislative project was to develop a program to stop the looting of underwater shipwrecks on the great lakes and to incorporate those sites into tourism destinations.  I had come to learn about the need of such a program when working as a radio broadcaster in Sturgeon Bay.

I had walked home with Henry from the Capitol, as we both lived not so far apart.  But I was not allowed to make my pitch for the idea until the tea was brewed and properly served at his Spaight Street home.  Certain social rules were to be observed! Henry would write approvingly of the mission, and the governor did not remove it from the state budget.

Many years later James met Henry through a shared interest in languages. Henry was a Latin scholar, James a professor in French and Spanish.  Henry would make fun of James for speaking ‘lesser languages’!

In time the combination of interesting people in Henry’s orbit would include our attending salons at his home where conversations and laughter would linger for hours.  James and I were introduced to a wide range of intriguing people, including Henry’s best friend, and now a long-time neighborhood resident, Rolf.   A continuing friend of ours over the many years.

Henry died on May 11, 2007.  James and I made the decision for the condo association to place his ashes in all the flower beds that were in existence at that time.  There is a real sense with each mowing or planting over the years of the friend who still shares a bit of the past and present at this home.

Henry willed several friends who were close to him money, and also provided a local gay non-profit a sizable endowment.  James and I were willed his condo.  It was a most generous act that changed our lives. We moved from the West Side to this neighborhood in August 2007.  We started at once to put our fingerprints on the entire property with improvements and beautifications.  In 2019 we used our legal rights to bring an end to a truly comical selling process and finalized the purchase of the top two floors of the 1892 home.

I know Henry would be pleased with the total transformation of the interiors of the upper floors, including a many weeks-long total re-wiring of the house.  He would doubtless smile at the third-floor broadcast studio, too.

Henry loved to sit at the beach across from his home.  After his passing, and since he requested no grave marker, a decision was made to use the remaining portion of his estate funds to have new and artistic city benches created for the park. Today when out for a walk, (with a mask, please) stop for a spell at one of the benches.  Look around and note the plants on the backside of the place you sit.  Those, too, are from the gardens of Henry.

The circles of life continue in a variety of ways.  Henry Dudek still demonstrates that fact. Thanks for reading and coming to know Henry for the first time, or smiling again with a fondness for a truly kind man.

Below is a great memory of the colorful cows that dotted Madison.  Pictured is Henry, Gregory, and James. 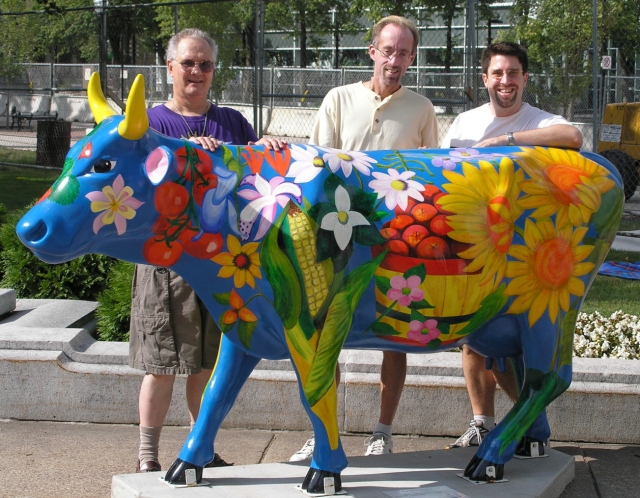