This is just a classic autocratic move from Orange Mussolini. 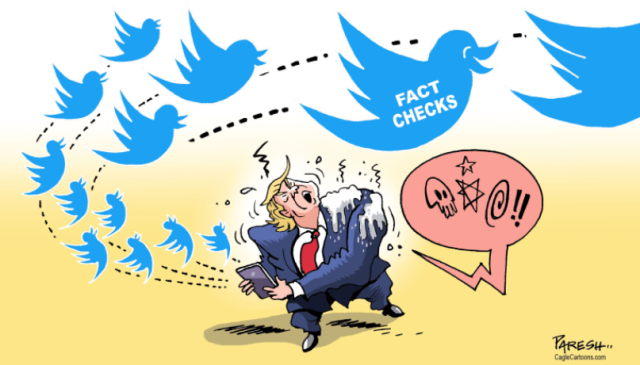 Donald Trump is akin to the person described in a 1997 book from Rick Bragg where a person gets to a certain old age and is pleased to now be able to lie like a Republican.  Trump is like that old person who feels a license to say anything from personal slams on how a person looks to the wild spreading of lies about any issue under the sun.  He has used—or should I say abused–his Twitter account to the point that the American public demanded accountability from the social media owner.

Over the past days, Twitter has added information to refute inaccuracies —or should we just call them lies–to Trump’s Twitter account.  That inflamed the autocrat, and he signed an Executive Order which seeks to strip liability protection in certain cases for companies such as Twitter, Google, and Facebook for the content on their sites, meaning they could face legal jeopardy if they allowed false and defamatory posts. Without a liability shield, they presumably would have to be more aggressive about policing messages that press the boundaries — like Trump’s!

Which is, of course, not the direction the autocrat was hoping to lumber.  The legal world has noted over the past 24 hours Trump was claiming the power to do something he does not have the power to do.  Well, is that not the autocratic way?

This is, of course, all bombast and chaos created by Trump to gin up the easily roiled in this nation, his minions, the angry white men who would be better off if they just spent their time getting new job skills. In the end, every legal expert with gravitas has stated Trump’s moves will be struck down by the courts.  I know you find this shocking!

Today Twitter needed to again flag Trump’s content as he used the same line from a racist comment decades ago.  The quote, “When the looting starts, the shooting starts” originated by a racist white Miami police chief named Walter Headley who targeted black people in 1967.  Twitter quickly prevented users from viewing Trump’s tweet without reading a brief notice that the post glorified violence, the first time it had applied such a warning on any public figure’s tweets.

It might be noted that prior to Trump no other elected person has acted so recklessly and without any sense of decency with public statements.  If pressed we would need to go back to President Andrew Johnson making horrendous statements in order to demonstrate how rare such outbursts are from those in the White House.

The absolutely correct decision to add the new warning labels on Trump’s tweets was approved by Jack Dorsey, Twitter’s chief executive.  Twitter further tightened restrictions on the messages from Orange Mussolini and the White House by blocking users from liking or replying to them, though people could still retweet the messages if they added a comment of their own.

Trump might try to spin his storm with Twitter but the pandemic and the subsequent economic fallout will still dominate the headlines.  He will not find an escape hatch with his order.  The free pass to lie and misrepresent on every issue imaginable, or to stir up hate and violence, can not be accepted any longer from this White House.   The public will no longer allow it.

As an example, take the case with Morning Joe, Joe Scarborough.  It is the same rancid lie that Trump created while on the toilet in 2017.  The same low-ball and gutter-type accusation against him on Nov 29, 2017, was tweeted by Trump last week.  My readers know precisely what would happen if you or I made a baseless charge of murder against anyone.  Trump should be treated as you or I would be under the same circumstances.

His supporters and defenders revel in false, defamatory, and disruptive behavior, as evidenced by their continued adoration and breathless support for the most flawed and embarrassing example of a human being to ever set foot in the White House. The rest of us, the majority who did not cast a ballot for Trump, will no longer stand for the abuse of Twitter by the likes of Donald Trump.