At last–and with hearty applause from the desk of Caffeinated Politics.

The Boy Scouts of America’s board of directors has unanimously agreed to let girls into the Cub Scout program and to give a path for older girls to pursue and earn the highest rank of Eagle Scout.

“The historic decision comes after years of receiving requests from families and girls,” Boy Scouts of America said in a statement.

It is about time! 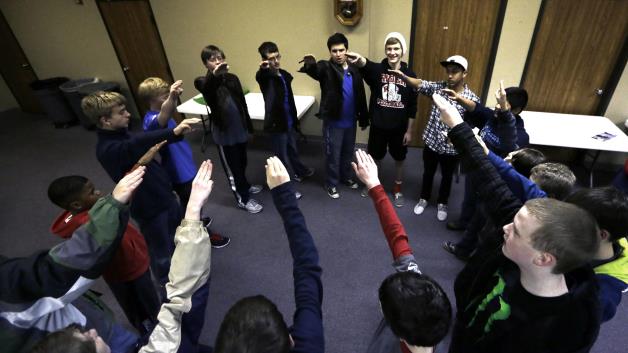 This story just underscores some of the posts on this blog to prove how deranged some are in the nation over the fact that laws are being made to ensure all people are treated with equality and fairness.  Good Lord, one would not want to inculcate the main themes of the Bible in our youth about love and hope.  Instead lets try and spin the ones that have been proved to have tortured linguistic hurdles as their foundations and make them serve as a centerpiece.  One simply can not make this stuff up as evidenced by the following story.

Do not be shocked to learn the story comes from Texas.

Boys are boys and the over-night camping trips will result in the same frolicking regardless of the label of the organization.  The same percentage of those boys will be gay regardless of how their parents try to spin the matter.  These parents who pretend otherwise are just plainly wrong.  Worse is the bigotry they are pushing onto their kids as an acceptable way of behaving.  Meanwhile the bulk of society has moved onwards to the road of civil rights.

Can you image a group like this not being laughed out of Madison?

Chatting in the living room one night, Ron Orr gave his 15-year-old son Andrew a choice: He could stick with the Boy Scouts of America and his mission to become an Eagle Scout, or he could join Trail Life USA — the new Christian-based alternative that excludes openly gay boys.

This was no small decision. Four generations of Orr men had been Eagles, including Ron and Andrew’s older brother. Andrew had spent years working toward Scouting’s highest rank, and was just months from reaching it.

But the Boy Scouts had decided to admit gays, and Ron Orr, a tall, soft-spoken man with a firm handshake, is clear about his Christian faith and what it says about homosexuality: It is a sin that cannot be tolerated.

His son agreed. He would forgo the century-old BSA for Trail Life, which officially launched just last month.

“It felt like I’d be hitting something higher than Eagle in terms of achievement,” Andrew said, in an interview.

So Orr and his son left BSA and set out with other families to build a new organization based on what they believe to be Christian values. Orr is a regional organizer who speaks to churches and groups about Trail Life. His son now aspires to achieve a Freedom Award, the new group’s highest rank.

The Orrs and others in Trail Life say they are fighting for the traditional values of Christianity and of Scouting, which includes a command in the Scout Oath to be “morally straight” — even as a changing America grows more accepting of gays and gay marriage. They are leaving an organization central to many of their upbringings with heavy hearts, but also with the belief that the Scouting they knew no longer exists.

“As Christians from a scriptural basis, we love all folks, but the Scripture is very clear that being homosexual is a sin,” Ron Orr said in an interview. “We’ve got to be able to hold a strong line and set a consistent example for our young men.”

Seems some folks in Altoona are out of sync with Pope Francis.

Let us recall the pope said that “If someone is gay and he searches for the Lord and has good will, who am I to judge?” Francis spoke in Italian but used the English word “gay.”

Meanwhile in Altoona there is a different tone among some Catholics.  And it is disgusting.

Boy Scout Troop 90 has been meeting at St. Mary’s Catholic Church for more than 20 years in Altoona.  Scoutmaster Bob Thill says the troop has been told it should find a new home after the end of the year because of concerns about the Boy Scouts’ new policy to allow openly gay boys to join the program, beginning next year. Rev. Derek Sakowski, of St. Mary’s, says the church’s pastoral council has strongly recommended cutting ties with the troop.

This is just part of the sad chapter of discrimination that continues to cloud the Catholic Church.   Let me be most clear here and call bigotry an ugly sight wherever it rears its head.  In this case it rests front and center with  Sakowski who has made it known that he was uncomfortable with the wording in the revised Boy Scouts membership standards indicating that no youth may be turned away “on the basis of sexual orientation or preference alone.”

We can then deduce Sakowski would welcome discrimination and out casting of otherwise able and capable boys simply based on being gay.  In 2013 that is just simply unacceptable, even from those who kneel and pray with seeming piety.

There should be strong words and rebuke for the actions of St. Mary’s Catholic Church for taking a position that runs counter to the needs of the Boy Scouts, and also to the modern-day sensibilities of the community.

There is a need to cut off funding for the Boy Scouts, and marginalize it in every way possible until it changes its anti-gay policies.

There is no reason that someone like Ryan Andresen who has worked hard and made a difference in his community should not be made an Eagle Scout.  Denying him this honor just for the fact he is gay is wretched behavior on the part of the Scouts and needs to denounced in every way possible.

I very much applaud Ryan Andresen for coming out and living authentically.  He will be a better and stronger man as a result of being open and honest with himself.  By the actions that he has taken he has demonstrated far more awareness and firm-fitting about how to live life than those who are now denying him the award he has earned.

Ryan Andresen had recently completed the requirements to earning his Eagle Scout award, including his final project of building a “tolerance wall” for victims of bullying like himself, but his Scoutmaster would not sign off on honoring him with the Boy Scouts’ highest ranking because he is gay, his mother said.

And late Thursday, the Boy Scouts of America said in a statement that because of Andresen’s sexual orientation and that he did not agree to Scouting’s principle of “Duty to God,” “he is no longer eligible for membership in Scouting.” But the family on Friday disputed that, saying the only reason Andresen was denied the rank is “because the Boy Scouts of America has a problem with Ryan being gay.”