The only thing I can grant Randy Hopper is his antics are pure magic for local newspaper reporters.

First there was his Chicky-Poo–while he was married.

Then his arrest for drunk driving.

Hopper, 46, of Fond du Lac, was cited for drunken driving and taken into custody on charges of disorderly conduct — domestic abuse, criminal trespass to dwelling and unlawful use of telephone, according to a Fond du Lac County Sheriff’s Office press release.

Hopper posted a $500 cash bond and was released from the Fond du Lac County Jail at 11 a.m. today.

Fond du Lac County Sheriff’s Office deputies were called to W5192 Rienzi Drive about 10:15 p.m. Sunday for a report of two men in a physical fight, according to the sheriff’s dispatch log.

How long will it be before former Wisconsin Republican State Senator Randy Hopper says ‘unions thugs’ held his head down and forced him to guzzle alcohol prior to his OWI arrest?

Well, think again.  Hopper already has a conspiracy theory about his arrest.

The fact is that too many have a cavalier attitude about drinking and driving.  It is too easy to pass the buck and make excuses.  At the end of the day there is only one person to blame for the mess Randy Hopper now finds himself.  That would be, of course, Randy Hopper.

Hopper made a selfish decision by getting into a vehicle to drive when he was intoxicated.  He might have hurt or killed others in his condition.  While it may be his style to place a political angle to the events that played out, there is no one over the age of 6 who would believe it.

Randy Hopper needs to own up to his drinking, lack of sound mind, and take the rap he is about to get.

Randy Hopper, a former senator of Fond du Lac, cried in court Thursday morning when he claimed county employees were out to get him.

He said that his vote to eliminate collective bargaining powers for most state employees was the catalyst for numerous threats aimed at him.

Hopper’s attorney, Dennis Melowski, said his client drank as much as 3½ beers at a Green Bay Packers game on Oct. 16, 2011, before driving back to Fond du Lac with his girlfriend, Valerie Cass.

Tim Hicken of North Fond du Lac testified that he called 911 for the reckless driving of a black suburban that was first spotted in the town of Calumet.

Hicken said he had no clue Hopper was the driver and that even though he is part of the union with the Fond du Lac County Highway Department, he was not part of a political movement at the time he spotted an erratic driver.

From the Fond Du Lac Reporter comes the police report of the facts that led up to the arrest of former State Senator Randy Hopper for driving under the influence.

I might add that drunk driving in Wisconsin remains one of the top ten focal points of this blog.  First time offenders need to be treated tougher in this state.    All should be supporting the desire by Governor Walker and members of the legislature to make drunk driving a most serious offense, starting with the first DUI.

At 5:54 p.m. Sunday, Deputy Nicholas Venne arrived at Festival Foods, 1125 E. Johnson St., to talk to the 51-year-old complainant, the complainant’s wife and his daughter about Hopper’s alleged reckless driving that was first observed in the town of Calumet in northeastern Fond du Lac County, according to the police report.

The 18-year-old daughter of the complainant said Hopper almost got into a head-on crash with a blue Mazda near Bud’s Landscaping on Highway 151 in the town of Taycheedah, according to her written statement.

The complainants who filed the report against Hopper told [Fond du Lac County
Deputy Nicholas Venne that [Valerie] Cass approached their vehicle after Hopper
was taken away and yelled at them. Cass had to be physically restrained by a
woman who came to pick her up. Cass also attempted to take a photo of the
family, according to Venne’s supplement to his report.

Former Wisconsin State Senator Randy Hopper needs a dog  as a friend as I am sure the police are not interested in hearing his woes.

More details have emerged of the arrest this past weekend of former Wisconsin state Sen. Randy Hopper on a drunk-driving charge. Hopper, a Republican, was defeated this past August in recall elections stemming from Gov. Scott Walker’s anti-public employee union legislation.

Hopper was pulled over into a grocery store parking lot, after witnesses reported seeing him almost cause a head-on collision. The Green Bay Press Gazette reports that officers administered a field sobriety test — in which Hopper could not keep his balance, and did not correctly recite the order of the alphabet, and then declined to take a breath test.

During the ride in the squad car on the way to the county jail, Hopper tried to start a conversation with the arresting officer, Deputy Nicholas Venne:

“Don’t ever run for office, by the way,” Hopper said. “Because if you did, someone like this guy (complainant) will call you in.”

When Hopper asked if he could know who reported him, Venne said the report will be available since it is public record.

“I am sure it will be public,” Hopper said while he rested his chin on his hand in the back seat of the squad car.

Hopper also asked Venne: “Will you put down there that you didn’t think that I (was) driving; you never saw me driving; you don’t know I was driving. I didn’t do anything illegal.”

Venne responded that he was working from witness statements that Hopper had been driving.

Hopper reportedly paused, staring in silence. He then said: “They told me I was the devil earlier, too. I am not that.”

Hopper declined to take an evidentiary breath test. However, jail staff members were able to get a preliminary breath test that registered a blood alcohol content of 0.13%, above the legal limit of 0.08%.

Sunday evening was not a good time to be driving anywhere near former Republican State Senator Randy Hopper, as the conservative was arrested for drinking and driving.

Now comes word that Hopper is trying to control the news of his arrest for DUI.

Bet Randy Hopper wishes he owned all the blogs too!

Would you want this guy dating your daughter?  I might add who gets into the car as a passenger when the driver is drunk? 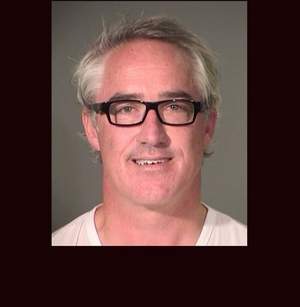 Too bad that Governor Scott Walker’s idea for tougher drinking laws are not yet in effect.

At 5:30 p.m. Sunday, a citizen dialed 911 to report a black Suburban “all over the road” on Highway 151 near County Trunk WH in Peebles, said Chief Deputy Mark Strand.

“It is customary for a dispatch center to keep the caller on the line so we can get updates in real time,” Strand said. “We were able to get a deputy in the area. The vehicle (Hopper’s) got called in about a mile from Highway 23.”

Hopper pulled into the Festival Foods parking lot, 1125 E. Johnson St., according to the report.

There was one passenger in the car, Valerie Cass, 26, of Fond du Lac, according to dispatch logs. Strand said Cass called someone who came to the Festival lot to pick her up and give her a ride home. Hopper’s SUV was left in the supermarket parking lot.

You might recall Cass as she has made a name for herself among politicos.

Even though the state is supposedly broke, top officials in Gov. Scott Walker’s team were able to scrape together enough money to give a state job to the woman identified as Sen. Randy Hopper’s girlfriend.

Anything for a political ally.

Valerie Cass, a former Republican legislative staffer, was hired Feb. 7 as a communications specialist with the state Department of Regulation and Licensing. She is being paid $20.35 per hour.

What position will she assume next?

A state worker with ties to Senator Randy Hopper who received a 35 percent salary boost when hired in February is leaving her position.

Sources have identified Cass as a woman in a relationship with Senator Hopper (R-Fond du Lac). Hopper, 45 , is involved in a pending divorce.

What it must be like to be an elected official and walk through your communities and know a huge swath of your constituents want to kick you from office.

Was it worth it, Randy?

The State Democratic Party said petitions were filed with the Government Accountability Board to hold a recall election against Republican Randy Hopper of Fond du Lac.

Organizers filed over 30,000 signatures – about twice the number of valid signatures needed to call the election. Petitions have also been filed for a recall vote against Senate Republican Dan Kapanke of La Crosse.