A needed gut punch for America to read.

An invisible network of similar threads connects hundreds of grieving parents across America. The connection is not formal. There is no organizational structure, no listserv, no roster of names. But their bond is strong enough that they often describe themselves—glibly but also in earnest—as “the club.” There is only one criterion for membership: you sent a child to school one day and then never saw them again because of a bullet, leaving you with pain, loss and perhaps even other shattered children. “It’s a club you spend your whole life hoping you won’t ever become a part of,” says Nicole Hockley, whose son Dylan, 6, was killed in the December 2012 shooting at Sandy Hook Elementary School in Connecticut. “But once you’re in, you’re in.”

This web of wounded souls spans America. They come from rural outposts and big cities, from Democratic strongholds and the reddest regions of Trump Country. They have different religions, income levels and ethnicities. What they share is the agony that comes with losing a child to gun violence in a place where that child was supposed to be safe. That calamity creates ineffable bonds. Even family and friends “can never fully, fully understand,” says Annika Dworet, Mitch’s wife. “So you feel a special connection with other parents who have gone through this.” Joe Samaha, whose 18-year-old daughter Reema was shot to death at Virginia Tech in 2007, agrees: “We under-stand the pain, the trauma and the long-term aftermath. It’s a brother- and sisterhood.”

There are always several top contenders around the world to earn the title of Time magazine’s Person of the Year.  But it would appear from any objective view of the international arena this year one name, more than any other, deserves such a ranking.

Long before the killing of Saudi writer Jamal Khashoggi at the kingdom’s consulate in Istanbul, there was every reason to place the Crown Prince on the magazine cover for the final year’s edition.  The always-intriguing turf battles within the ruling Saudi family, the struggle for the heart and soul of Islam, the geo-political fight with Iran, the proxy wars and alliances through-out the region has long placed Salman at the center of the news world.

The Crown Prince had allowed many–including this blogger–to see hopeful signs that modernity could take place over time within Saudi Arabia.  With that view also came the real possibility of modernity of the harsh brand of Islam which dominates the kingdom.  Wahhabism has been a most detrimental force in the region, and its export has made for terrorism around the globe.  The towering figure of Salman might have brought many changes over decades of his ruling.  Much of that is now in doubt.

What happens following the heinous murder of Khashoggi makes for another chapter yet to be written in the kingdom. The central role that Saudi Arabia plays in international relations creates many hurdles, as nations based on law and order must now seek a path forward that does not undermine their basic concepts, while at the same time grasping the need for realpolitik.

Which all leads to the most important, exasperating, mysterious, and newsworthy person of the year.

Time magazine’s Person of the Year.

There is no way to deny the truth.

And for many in this nation where facts and full paragraphs are challenging Time magazine has simplified it.

Over the course of Trump’s time in office the magazine has had three covers to make the point.

Ouch!   But what a point the cover makes.

The April 23 TIME cover, depicting the growing chaos within the Trump White House may look familiar to some of their readers.  Time asked collaborator Tim O’Brien to re-imagine a cover he did just over a year ago.  With his inventive style and fine hairline brush, Tim’s updated piece shows the rising water from the storms swirling inside the Oval Office.

In 6 months the cover will be pictured as a Whore-A-Cane thanks to the under-educated in this nation who voted for Trump. 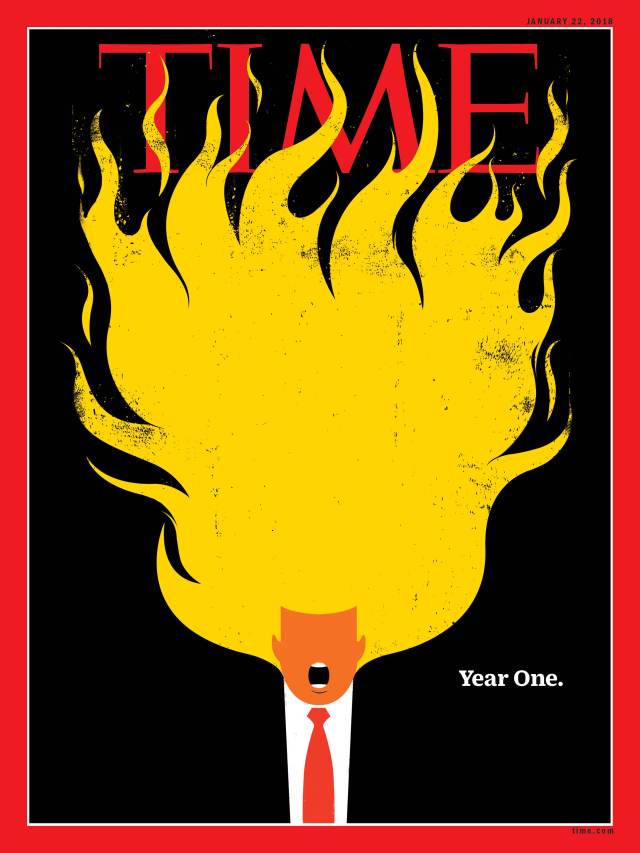 U.S. media company Meredith Corp. has reported that it will buy Time Inc., the publisher of Sports Illustrated and Fortune magazines, in a $1.84 billion all-cash deal backed by conservative billionaire brothers Charles and David Koch.  It said $650 million in equity came from Koch Equity Development, but added KED won’t have a seat on the board of the combined company and won’t take part in editorial decisions.   But when it comes to the conflict of conservative views and the need for Time to report the news and inform the readers we all know who the winners and losers will be.

This is not good news for the world of journalism.

This statement about Koch having “no influence” over TIME should give us as much assurance as The Wall Street Journal’s “editorial independence committee,” which caved to owner Murdoch just 4 months after his acquisition of the newspaper.

Charles Koch, the chief executive of Koch Industries, and David Koch have long sought to shape political discourse through their support of nonprofit organizations, universities and think tanks but have never owned their own media company. Under the terms of the deal, Meredith will pay $18.50 a share for Time Inc. The boards of both companies finalized the deal on Sunday evening. The deal is expected to close in the first quarter of 2018.

I have given the subject of Time magazine’s Man of the Year a fair amount of consideration over the past several months.

The winner of the final magazine’s cover of 2016 was clearly never in doubt with the election of Donald Trump to the presidency. But as I think about the big thematic issues that developed this year, and which shaped almost every headline in the morning newspapers, my mind keeps going back to that 2016 Time cover.

The driving force for what happened in 2016’s election night shocker is now playing out with policy fights, media bashing, court challenges, marches, and very deep clashes within our culture.

Therefore I do not see a personality or an event that drives Time’s final cover this year. Instead it is the deep resentments and frustrations not only in our politics but among, and between the citizenry that will be the cover subject this year.

For a lack of a better summation I predict The Great American Divide will be the idea that makes for Time’s Idea Of The Year.