When Elvis Presley joined the army his line upon getting the famed haircut was “Hair today, gone to-morrow.”

Many have been wondering what will happen to Rod Blagojevich who is going to prison, and has some mighty fine hair that he is most fond of, and spends time caring for.  (It should be noted that Blagojevich is also an Elvis fan.)  Will there be a need to damage the hair, just to make that Blagojevich pays for his crimes while in office?

Well there is good news for hair lovers everywhere.

I actually am glad about this news, as I think Rod Blagojevich has awesome hair.  In fact, the hair of the former Illinois governor had made news before on CP.  (Can anyone be shocked?) 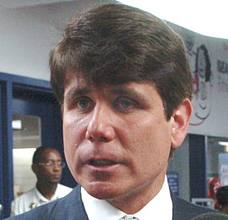 Although it could be months, if not years, before the convicted former chief executive sets foot inside a federal prison, his notorious helmet of hair would not be in jeopardy once he’s behind bars — unless he forgets to wash it.

“There will be no restriction of hair length as long as it is neat and clean,” notes an inmate manual for the all-male Gilmer Federal Prison in West Virginia., which reflects the policy of the more than 100 institutions administered by the federal Bureau of Prisons.